Tomorrow is Election Day in the United States. It's an "off-year" election, which means a lot of people won't bother to vote since the offices to be filled aren't that important. Or are they?
Last year, our family read "Confrontational Politics." My biggest take-away was the importance of our involvement in local and primary elections. Consider the background of our most powerful politicians. Many of them started in lower level elected positions -- on city councils or in state assemblies. My congressman (who happens to be my husband's Sunday School teacher) started his political career as a state delegate. My current state delegate (a member of the same Sunday School class) first held elected office on the city council.
Want to see people of integrity in positions of power? Find and encourage people of integrity to run for local office. Support their candidacies with your time and money. The primary election for a local office may garner only a few thousand or even a few hundred votes. You have the opportunity to make a big difference. 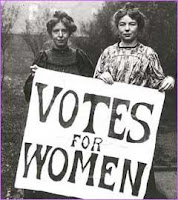 God has entrusted us with an awesome responsibility, the ability to choose the people who govern our countries. People have fought and died for the right to self governance, and yet, how often do we take this right for granted? Sometimes, I fear those of us today are more informed about our American Idol votes than their choices for those who will make decisions for the country.
Have you ever considered that when God led the Israelites out of  Egypt, He gave them precise instructions for sacrifices and offerings , dietary restrictions, ritual cleansings, sabbath regulations, festivals, the Tabernacle, the succession of the priesthood, the penal code, and even the priestly garments. But He didn't give them any kind of national Constitution or set of instructions for the structure of a national government.
Instead, we are told "the Lord raised up judges...Whenever the Lord raised up a judge for them, he was with the judge and saved them out of the hands of their enemies as long as the judge lived...But when the judge died, the people returned to ways even more corrupt thant those of their fathers, following other gods and serving and worshiping them." (Judges 2:16-19)
I find it fascinating that over and over, God gave the Israelites the opportunity to practice self-government -- and over and over, the people failed to regulate their own behavior and follow God's laws. "In those days, Israel had no king; everyone did as he saw fit." (Judges 17: 6 AND Judges 21:25) If only they had immersed themselves in God's Word to the point that what they "saw fit" aligned with God's law.
As I reflected on this "oversight" I began to wonder if God's ideal isn't for each of us to govern ourselves. Imagine a world where everyone followed the Ten Commandments and the Golden Rule, where everyone loved God and his neighbor. Politicians, lawyers, and police officers would find themselves unemployed.
Unfortunately, as the examples from Judges demonstrate, our sin natures lead us to evil. And it is here we seem the limitations of human government. John Adams said,“Our Constitution was made only for a moral and religious people. It is wholly inadequate to the government of any other.” Even leaders with integrity cannot compel people to want what is right and good.

And so I urge you to become informed and give your responsibility for choosing leaders the consideration it deserves. But in the end, we have to reach people with the Word of God -- because the only way we will effectively change our societies is if people turn their hearts to God.

Do you vote regularly? Do you take the time to become informed about candidates positions on issues? And most of all, have you done your part to turn hearts toward God?

After leaving the corporate world to stay home with her children, C.J. Chase quickly learned she did not possess the housekeeping gene. She decided writing might provide the perfect excuse for letting the dust bunnies accumulate under the furniture. Her procrastination, er, hard work paid off in 2010 when she won the Golden Heart for Best Inspirational Manuscript and sold the novel to Love Inspired Historicals. Redeeming the Rogue is an August, 2011 release. You can visit C.J.'s cyber-home (where the floors are always clean) at cjchasebooks.com
Posted by C.J. Chase at November 07, 2011