Writing is an art form, like music or sculpture or dance, but where music uses sound and dance uses movement, writing uses words. Good writers place exactly the right words in exactly the right place for maximum effect. Just as a composer needs to study music theory—scales, chords, the circle of fifths—so too must a novelist master the tools of language.

Look at the last sentence again. If you aren’t a musician, I’ll forgive you for thinking that the circle of fifths has something to do with the five rings of the Olympic logo or that a chromatic scale is the external layer on a tropical fish. I have sympathy for those whose music appreciation doesn’t go much beyond knowing the call letters of their favorite radio stations. I can sum up the entire breadth of my knowledge of painting with a single phrase: “I know what I like.”

But language is different. Language is the most accessible of all the arts because each of us uses it every day. We mumble a “good morning” to our family, listen to the weather forecast, read the cereal box, and jot a quick note to get more milk—all within an hour of waking. For the rest of the day we will text, talk, email, tweat…well, you get the idea. Functioning in a modern society requires every person to have a bit of a writer living inside.

Given that language is so important to our everyday lives, I thought it might be fun to look at some common figures of speech (sometimes called rhetorical devices) that appear in literature. Why do writers use them? Sometimes we want to add emphasis. Sometimes we want to make our ideas more memorable. And sometimes, we just want to play a little joke on our readers.

Did you see what I did there? That’s called anaphora—starting a series of phrases or sentences with the same words, in this case “sometimes we want…” Its counterpart is epistrophe—ending a series of phrases with the same words. Usually the last of the series carries an extra punch or a little twist—it’s more emotional or humorous. The reader’s subconscious mind sees the pattern in anaphora or epistrophe and begins to pay closer attention, waiting for the final thrust.

A couple other favorites of mine are asyndeton and polysyndeton. Asyndeton is taking a series of three or more—words, phrases, even sentences—and not including a conjunction. It’s tense, abrupt, agitated. Polysyndeton is its opposite. The writer puts conjunctions between all the words in the series, thereby slowing down the pace of the series. If you’ve ever read a sentence that goes on and on and on, you know what I mean.

No, there won’t be a test on the terms tomorrow. However, when we are aware of the ways a writer puts words together, we develop a greater appreciation for the artistry behind good writing, like a musician listening to a master perform. We can better understand what the writer felt most important and most wanted us to learn or feel. We come away with a deeper understanding of the ideas and concepts the writer has put forth.

Of course, you are probably familiar with some common figures of speech such as similes, metaphors, irony, allusion. And if you have a teenager in the house? You’re no doubt well acquainted with hyperbole. (“I’ll just die if I can’t have Latest Gismo X.”)

Did you ever consider that God also speaks to us in language? The Bible is the world’s greatest work of literature, and its author uses figures of speech to add emphasis and make ideas more memorable.

“The Lord is my shepherd.” Obviously God doesn’t carry a crook and walk around the hills with a border collie. He just wanted us to know he cares for us like a shepherd cares for sheep. But, oh, the power of that figure of speech! It is perhaps the most famous metaphor in the world. 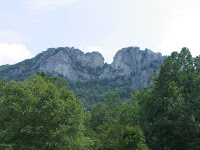 Here’s a bit of personification (giving human characteristics to objects or animals) from Isaiah 55:12. “For ye shall go out with joy, and be led forth with peace: the mountains and the hills shall break forth before you into singing, and all the trees of the field shall clap their hands.” Yes, we know. Mountains don’t have voices and trees don’t have hands, but the word picture this paints for us is one of impossible beauty and joy and awe.

Now consider Jesus’ conversation with Nicodemus in John chapter 3. Did you ever notice that each time Jesus answers Nicodemus’ questions, he begins with the same phrase? Here’s the familiar King James Version: “Verily, verily, I say unto thee…” The phrase appears in verses 3, 5, and 11. (Anaphora—for those who have already forgotten the term.) Furthermore, he says the first word twice in each instance. Verily is an old word that means “in truth.” Jesus used the word six times in a mere eight verses. Now that’s emphasis! Is there any doubt what Jesus wanted Nicodemus (and us) to learn?

Here’s another rhetorical device, parallelism. “I am Alpha and Omega…” Jesus says this four times in Revelations. Parallelism is a way of reinforcing similar ideas by making them parallel. Jesus is both the beginning (Alpha) and the end (Omega)—equally.

In the first appearance of this phrase, we have parallelism with polysyndeton (using the conjunction “and” multiple times in the series): “I am Alpha and Omega, the beginning and the ending, saith the Lord, which is, and which was, and which is to come, the Almighty.” (Revelations 1:8 KJV). Polysyndeton gives the feeling of something that goes on and on and on—a pretty good definition of God, as a matter of fact.

Now let’s look at the last time Jesus speaks this phrase, in Revelations 22:13. This verse combines parallelism with asyndeton (no conjunctions in the series): “I am Alpha and Omega, the beginning and the end, the first and the last.” Asyndeton creates a sense of urgency—very appropriate since seven verses later Jesus promises he is coming soon.

Pretty cool, huh? The entire concept of God is too big for our minds to comprehend. But figures of speech let God communicate with us in a way that we can glimpse a piece of that greatness.

Have you ever looked at the Bible the way you would a piece of literature, analyzing the Author's use of language to see what points He wanted to emphasize? What did you discover?