It's rare to find Christian novels with a medieval setting. For a number of reasons, medieval novels are not "trendy" in the CBA, and even when written by well-established authors, sales numbers are low. The new exception to this rule seems to be in young adult fiction, which of course is why the medieval series I'm working on is intended for a cross-over teen/adult audience. Melody Dickerson has had a lot of success with this genre, and I hope to follow in her footsteps. 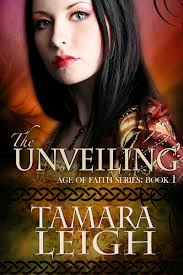 Christian medieval novels can also be found through small presses (like my Dance of the Dandelion with WhiteFire) and through self-publishing venues. Recently I discovered an awesome new series that has been self-published by Tamara Leigh. Tamara is a well-established author in both CBA and ABA romantic fiction. I've previously read and enjoyed her novels written for both audiences, and her new series offers the best of these two worlds.

The back cover reads:

12th century England: Two men vie for the throne: King Stephen the usurper and young Duke Henry the rightful heir. Amid civil and private wars, alliances are forged, loyalties are betrayed, families are divided, and marriages are made.
For four years, Lady Annyn Bretanne has trained at arms with one end in mind—to avenge her brother’s murder as God has not deemed it worthy to do. Disguised as a squire, she sets off to exact revenge on a man known only by his surname, Wulfrith. But when she holds his fate in her hands, her will wavers and her heart whispers that her enemy may not be an enemy after all.Baron Wulfrith, renowned trainer of knights, allows no women within his walls for the distraction they breed. What he never expects is that the impetuous young man sent to train under him is a woman who seeks his death—nor that her unveiling will test his faith and distract the warrior from his purpose.


I loved everything about this book. As an author and editor, I have a hard time these days finding a novel that will actually hold my interest. This one kept me riveted. I read it straight through in a day. I loved tough, scrappy Annyn, and the book brimmed with excitement. I personally liked that it was a bit sexy for an inspirational novel, but that it also had a lovely thread of forgiveness and redemption woven throughout. I also found the author's historical research to be very accurate. For those who love the energy of secular romance novels but would prefer something cleaner, this one should make you as happy as it made me.


And for a quick compare/contrast between Tamara's writing and my own...

This novel is fairly different than Dance of the Dandelion. It follows a typical romance formula and includes a lot of action and suspense. My novel follows more of a coming of age format and is focused on character development more than action. In addition, my novel is set almost two centuries later. However, I think both Tamara and I have a lovely flowing writing style full of awesome description. The books are also similar in that they are both very romantic and even a bit edgy for Christian novels.

Comparing it with my still-in-process young adult novel, Dauntless Love, there are many more similarities. I truly hope that I captured the same excitement and energy that Tamara has brought to life in her action-packed novel. Dauntless Love follows the same romance structure and features a heroine in a man's role, just like The Unveiling, and the settings are only about 60 years apart. The heroines even go through similar journeys of giving up on God after tragedies in their lives and finding their way back within the pages of the book. The main difference is, I avoided any overt sensuality and kept the book more innocent for my teen audience, although there is still plenty of romantic tension. While I would not call Dauntless Love "edgy," there is an innate grittiness to the medieval culture that keeps it from being "sweet."

I highly recommend The Unveiling for older teens to adults who like an edgier, more realistic read. It's a lot of fun and will keep you turning pages late into the night.
Posted by Dina Sleiman at September 13, 2013