Whether or not you consider yourself a writer, if you love to read, chances are you have secretly dreamed of writing "The Great American Novel." I know I certainly have. But what precisely is meant by that term. According to the guru's of pop research, Wikipedia, The Great American Novel can be described this way.

The "Great American Novel" is the concept of a novel that is distinguished in both craft and theme as being the most accurate representation of the spirit of the age in the United States at the time of its writing or in the time it is set. It is presumed to be written by an American author who is knowledgeable about the state, culture, and perspective of the common American citizen. The author uses the literary work to identify and exhibit the language used by the American people of the time and to capture the unique American experience, especially as it is perceived for the time.

And what are some examples of this Great American novel? Moby Dick, The Adventures of Huckleberry Finn, The Great Gatsby, The Catcher in the Rye, just to name a few.

So why did I set my first novel in the medieval period in England? My next published novel was set in 1820's Virginia. A little closer to home. But my sweet little romance didn't quite capture the "spirit of an age." Certainly not the spirit of my age.

However in between those two, I tried my hand at contemporary. In American. Might this one capture the spirit of an age? A Christian ballerina wounded by church, a veiled Muslim woman, and a bi-racial hippie chick who meet as returning college students over a group project on diversity. Ding! Ding! Ding! I think we have a winner folks.

Dance from Deep Within does indeed capture the quest for meaning and authenticity which is so much a part of our current age. It examines the postmodern mindset of our generation and the all important element of diversity in American culture. 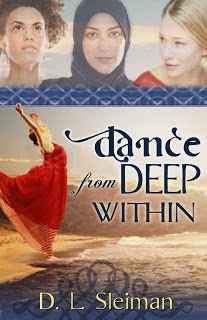 Okay, admittedly, it might be better described as "The Great American Christian Novel," but I think it goes beyond that as well through its exploration of various characters as they all search for truth, authenticity, healing of old wounds, and a desire to learn to live from deep within their hearts. The cast of characters is rounded off by a group of young men including a conservative Christian, a new convert from Islam to Christianity, and a die-hard atheist. The characters are dancers, business people, engineers, pastors, writers, and future doctors.

And they are all facing another phenomena, the new quarter-life crisis of seeking to define oneself that is unique to this generation.

Dina Sleiman writes lyrical stories that dance with light. Most of the time you will find this Virginia Beach resident reading, biking, dancing, or hanging out with her husband and three children, preferably at the oceanfront. Since finishing her Professional Writing MA in 1994, she has enjoyed many opportunities to teach literature, writing, and the arts. Her debut novel, Dance of the Dandelion with Whitefire Publishing, won an honorable mention in the 2012 Selah Awards. Her latest novel, Love in Three-Quarter Time, was the launch title for the Zondervan First imprint. Look for her newest release, Dance from Deep Within, in November. Dina is also a part-time acquistions editor for WhiteFire Publishing, and she is represented by Tamela Hancock Murray of The Steve Laube Agency. Join her as she discovers the unforced rhythms of grace. For more info visit her at http://dinasleiman.com/