As part of Anita Mae Draper's release week, it seems more than appropriate to give a nod to her publishing house, Guideposts Books, and to examine the rich legacy of faith left by the company's founder, Norman Vincent Peale.

Norman Vincent Peale was born in Ohio in 1898. In his younger years he delivered newspapers, sold pots and pans, worked in a grocery store, and as a reporter. And then he found his calling. He pastored multiple churches in the northeast, and eventually became the pastor of the Marble Collegiate Church in New York City in 1932. From 1932 to 1984 the church grew from 600 to 5,000 members.

Peale took a different approach to his sermons, leaving aside the hellfire and brimstone style preaching of many of his peers in favor of emphasizing a positive approach to modern living by applying the principles of Christianity. He is credited as being the first to meld modern psychology with theology.

His simple, positive sermons became widely known, broadcast on his radio program titled "The Art of Living" for 54 years, and mailed to more than 750,000 subscribers weekly. Over the ensuing decades of ministry, Peale penned more than 40 books, including the wildly popular The Power of Positive Thinking, which has sold more than 20 million copies worldwide.

In 1945 Peale and his wife Ruth founded the Guideposts organization, which has since expanded to include the publication of two magazines, the distribution of millions of complimentary publications distributed worldwide, a prayer ministry, online devotions, and books and ebooks, all designed to encourage, to edify, and to inspire others. Peale passed away on December 24, 1993 at the age of 95, leaving behind a legacy of faith and hope and encouragement that continues to bless people around the world by the millions.

Throughout his life and through his works, Peale personified Paul's command to the church at Rome:


Therefore let us pursue the things which make for peace and the things by which one may edify another. 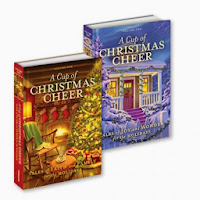 To celebrate her new release (available HERE), Anita is offering a special giveaway this week of the two volume set of hardcover books that includes "Riding on a Christmas Wish" and a $10 Starbucks gift card. Leave a comment below to enter. We'll pick the winner on Sunday evening, November 10.