Flowers At Your Service

This week we're celebrating Beverly Allen's release of Bloom and Doom and while I don't own or work in a flower shop, my husband and I ran a commercial greenhouse operation for five years and since this week's theme is about flowers, I thought this would be an opportune time to show you our operation.

The flower shop in Bloom and Doom takes deliveries of specially-grown flowers and arranges them into gorgeous arrangements in whatever fashion the client requests. Audrey uses her knowledge of the language of flowers to ensure her clients send the right message with the flowers they've chosen to use.

Our greenhouse was a bedding plant operation and although we started growing Spanish Onions and Patio Tomatoes in January, we were only open to the public from May 1st to June 30th. This aerial shot shows our Fillmore, Saskatchewan location on the northern part of town.

As you can see, we had 3 hooped greenhouses on the go and although you can't tell from this view, we also used the building on the right side which started as a garage, and used for that purpose once all the plants and shelves were out. Behind the garage is a lean-to greenhouse on the south side, one on the north, and the Seed Room operation in the middle. (Think lots of lights, heating cables, and eventually, a germination chamber.)


I usually spent September and October ordering all the cuttings and seeds. February is when the Petunia seeds were started so we'd have them ready for hanging baskets at the beginning of May since people liked giving them for Mother's Day. Every Petunia color had it's own seeding box and we also needed them for the picotee edged ones, the doubles, the stars, the minis, etc. Below are 2 boxes of seedlings. They develop a set of seed leaves first but we wait until they have their first set of true leaves before we plant them. The true leaves will look different, so the following pics aren't ready yet, but they will be in a couple days and then after transplanting, what filled one 12" x 16" box will require 40-50 square feet of shelf space.


Nelson was in charge of the watering and knew the perfect temperature and pressure to give the plants. They liked warm water, but some - like the geraniums - didn't like it on their leaves or they'd get spotty. If you used the wrong nozzle on the end of the watering wand, the water could spray out and knock the little seedlings over, so you had to pay attention to what you were doing.

As you can see, we had a lot of seedlings growing at the same time and employed several people to help us during transplanting season. The caption above shows Nelson working in "B" greenhouse. We gave them each a letter starting with the garage greenhouse as an easy way of identification, thus we had A, B, C, D, and the Seed Room as well as the north lean-to and south lean-to. A big painted letter on each door and we were good to go.

After a couple years we did away with the wooden seed boxes and switched to hygienic plastic ones. Here's the other side of  "B" with shade control to keep the sun from burning the seeds that need light to germinate.


This next one is "D" - the smallest of the hooped greenhouses. That's Nicky, who was just itching to play the tag game... you know the one where you buy a geranium with a tag that says Scarlet and when it blooms the color is white? That's the switcheroo tag game. I'm glad to say we didn't have many complaints about the wrong colors, which is a credit to Nicky's control.


Most people want them blooming and so that's what we sold, but for a robust plant with lots of branches - meaning more flowers - they really should be planted before they reach the flowering stage. If you buy it in flower, then the flowers should be snipped off at the stem so the plant's energy will go into putting down roots instead of trying to look pretty. It really needs to come out of transplant shock to look its best.

I loved working in the greenhouse, right from seeding to selling. This next photo would have been taken at the beginning to middle of April and it was always nice to walk from the cool air into the earthy-scented warm air beneath the plastic. I especially liked the smell in February after walking through snow drifts to get to the Seed Room. Such a contrast, but to walk in and see new life growing after walking through a frigid work was rather exhilarating.


Hmmm... is Nicky looking at me or the tags? It looks like he might be crossing his arms as a way to keep his hands out of trouble - especially with those super big tags facing him.


Although we gave the customers free reign of the hooped greenhouses and cold frames, we used the huge "C" greenhouse as our main showroom for the potted plants like the zonal, ivy, and pansy geraniums, begonias, verbenas, impatiens for sun and shade, wave petunias, herbs, and all sorts of ivy and fillers for hanging baskets and decorative pots.


Eight hundred or so cuttings would arrive in February and take me a couple weeks to transplant. A trim at the end of Mar took another week or so, but the results were beautiful. One customer had severe allergies and would stand outside at the end of "C" and send her husband in to do the buying. She did the picking though, yelling at him down the aisle of each greenhouse he entered.

I often thought of that couple while Beta-reading the sequel to Bloom and Doom because there is a cop in the story who is allergic to flowers as well and Bev/Barb made him so very realistic.


This is an excellent photo of "D" to show the difference between inside and outside a greenhouse. Inside, everything is watered daily and not dependent on the weather.


Every weekend during May and June we'd head out to the Farmer's Markets and other venues. Planning started a couple days before where we'd find a spot to set our orders aside. The day before the event we'd load one truck and trailer outfit at a time ensuing the plants were well-watered first. We also had to ensure we had a couple employees to do the selling and one to do the watering because once the greenhouse opened for the season, customers liked to be given the grand tour, and sometimes by the time the watering was finished, you had to start again. So each needed to know what their job was for the day while we were gone.

Nelson's father who started the greenhouse operation would take his 1/2-ton and custom-built wooden trailer to the Regina Farmer's Market. Nelson would take our van and custom-made metal greenhouse trailer to whatever venue we'd been booked into. The photo below is where we'd set up for 2-3 days a year beside the Stoughton Family Food store. Every Saturday I would take a teen employee and head to the Estevan Farmer's Market with my 1/4-ton and trailer. All vehicles, including the family van, would be packed tight with built-in shelving (paint cans and plywood). On average we'd come back with 40% of our stock left depending on the weather, and we'd have to unload and water everything. What we brought back looked worse for wear and needed a week to get over the 'travel shock' and perk up again.


July was spent cleaning out the greenhouses and getting our float ready for the parades which preceded the local fairs. Nelson made this float to sit on his lawn mower and trailer. He'd drive. Crystal would walk beside the trailer holding Jessie who sat on a little chair. Both girls would throw candies to the kids along the route.

My final shot is "C" in full bloom with my happy workers standing beside the Patio Tomatoes and waiting for their next orders. Oh look... Nicky has his hands behind his back. Such a good little boy. 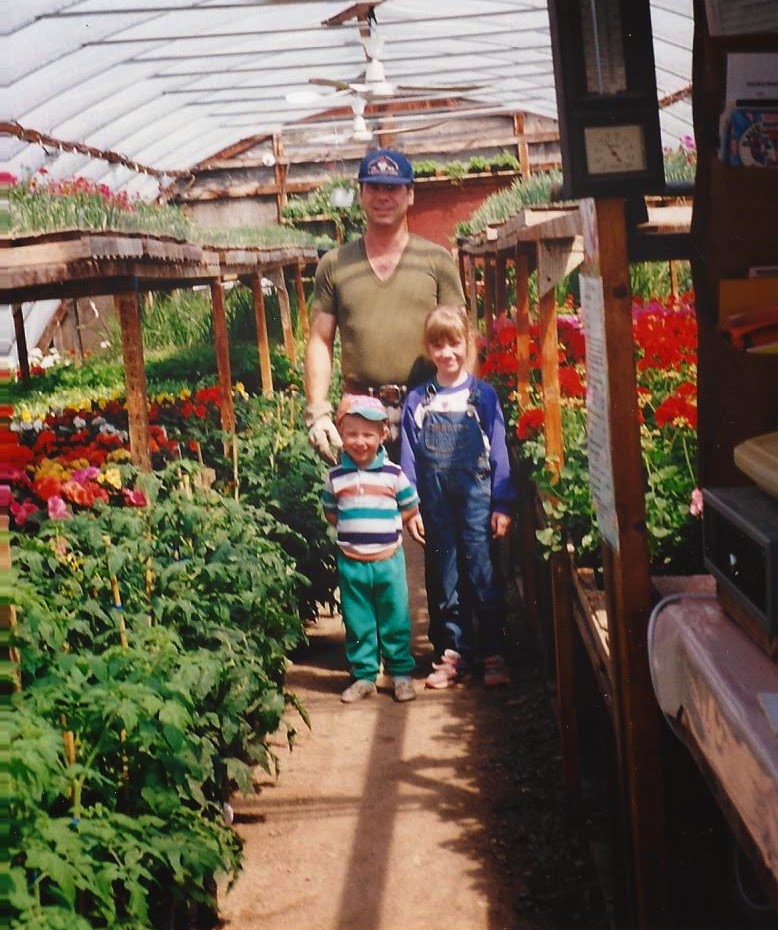 Knowing that, do you have a flower question? We'll do our best to answer it. 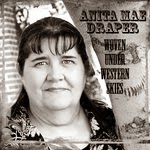