Wahoo! Today's the official release of Bloom and Doom by our own Beverly Allen (aka Barbara Early). Bloom and Doom is Book One of the Bridal Bouquet Shop Mysteries from Berkeley Prime Crime.  Today we're celebrating by asking Beverly a few Q's. Don't forget to add a comment to be in the drawing for a copy! 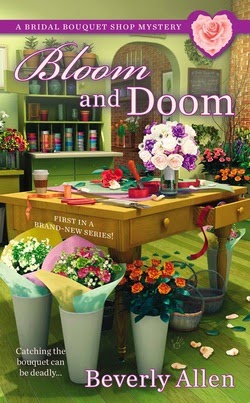 (Susanne here.) Congratulations! What happened when you got The Call?
(Beverly.) Panicked, mostly. Those who know me best know that the telephone is my least favorite form of communication. I tend to be almost phobic about the telephone, especially talking with someone I don't know well. It was a short conversation, since my brain went blank. But after the phone call, we addressed all my questions via email.
How did your family respond?
My family is very supportive. But I think my husband was relieved that my very expensive writing hobby was finally going to earn a little back. I love conferences, so I suspect that it's going to take a while for income to finally exceed expenses.
Ah yes, conference fees. But conferences are worth their weight in proverbial precious metals. So tell us a bit about the story.  Bloom and Doom is a Cozy Mystery. What does that mean?
Cozy mysteries are traditional whodunits, generally featuring an amateur sleuth and very little gore. Many cozy readers appreciate the absence of sex, graphic violence, or strong language on the page. There's usually a cozy small-town setting to enjoy and quirky characters to meet.
I love a good cozy mystery! But Bloom and Doom is published in the secular market. What's it like to write in that market?
I found it to be an exciting opportunity. Perhaps because cozies tend to be clean reads and readily available in the secular market, they're not popular in the CBA right now. So I'd final in contests--like the double final in the Genesis--and then meet with agents and editors who smiled when I came up to them at conference with the finalist tags hanging from my lanyard, but had absolutely no use for me the minute I said I wrote cozy. Terribly frustrating for an aspiring writer. One said, "Have you thought about writing romance?" I didn't think it was for me, but I tried, and even had a "romance" novella e-published by a small Inspy press. But if you read it? Guess what. It's a cozy mystery.
While I've been careful not to turn Bloom and Doom into an inspirational, I haven't run into any opposition to introducing characters of faith. (Especially with the wedding theme. Someone has to officiate, and several scenes do take place in church.) I'm rather excited about this, since it bucks a trend I've seen in mysteries of late, that if a religious character is introduced, he's either the killer or otherwise some fanatical lunatic. I find that sad for a number of reasons: mainly because it denigrates a whole group of people, most of whom, while imperfect, are sincere and kind and wonderful people to know. But also, as a reader, it makes those mysteries too predictable.
You've addressed one of my pet peeves: when the clergy is the killer. Or a wimp. Thanks for bucking the trend!

Moving on...I love the cover of the book. Can you tell us about the process of creating it?
It's a great cover, isn't it? I wish I could take credit for it. I did submit a few pictures that I'd found of working flower shops, pictures of tools, and a list of what they'd need on hand. But they have a great art department, and I couldn't be happier with what they came up with. People have told me they can almost smell the flowers on the cover.
It is an effective cover, that's for sure. It gives us so much information, and the details are amazing. It also clues us into the fact that your sleuth, Audrey, is a florist. How were you inspired to create her? Why is she a florist?
I'll have to admit a little collaboration there. One thing I learned in the process is that sometimes the author comes up with an idea and the publisher loves it. Sometimes the publisher has an idea that they think readers will enjoy and they try to find a writer who's a good fit. I feel blessed to say that my agent thought my voice would fit the wedding florist they were looking for--and I was even more excited when an editor read my proposal and agreed.
That's not to say I didn't draw on my own experiences and imagination. The brief outline they sent me included the idea that Audrey spend the summers visiting her Grandma Mae with her cousin Liv. Well, I have fond memories growing up at Grandma Bea's, often with my cousin Lisa. And we really did race around the backyard, shoving buttercups under each other's chins and making bouquets of wildflowers. Only Audrey's love of flowers continued to grow until it became her passion.
Oh, I just love that. But speaking of flowers, what's the language of flowers, and how do you use it in the novel?
The language of flowers goes back a long time, but reached its heyday during Victorian times. Most flowers had at least one meaning attached, and could be used to communicate. "Say it with flowers" was more than a catchy slogan!
Today, florists still often compile lists of what the flowers mean, but the meanings have "evolved" to be almost universally positive. (Probably so they could sell more flowers!) But I was fortunate enough to find a reprint of an old guide, and love that flowers could be used to express almost any sentiment, from "elope with me" to "a deadly foe is near." Now that's fodder for a good mystery!
Audrey Bloom is passionate about flowers, and that works for her. When she sees people, they often remind her of flowers, and their personalities seem to mesh with the meanings. When she works with flowers, the meanings come into her thoughts and might even shed light on the case she's working on.

As seen on your Facebook page, you are gifted at flower arranging. Did you take a class so you could get to know Audrey better, or is this a skill you've had for a while?
I will say it's easier to write about flowers than it is to work with them in real life.
I can't say I'd done much before writing the book. I did hang around in a working flower shop, to get the flavor of the place, and visited a few more to see how they differed. That gave me enough to know how I'd design a flower shop--which is what the Rose in BIoom looks like. But when Audrey started designing flowers, I felt lacking in describing the actual work, especially the industry terms used, so I did take a short floral design course--difficult because of allergies.
I really do enjoy it, except for the burning eyes and the skin rashes from lily sap. (Which helped in creating the town's police chief, who also has severe allergies.) I should practice more, but when I do, I work mainly in silk.
Well, you're very good IMHO.

I'm a big fan of a bit of romance in a story. Can't help it. Is there romance in the story?
Perhaps a smidge. Rather light in the first book. Audrey is just getting over a rather nasty breakup and she's not sure she's ready for a new romance. Even so, the new baker in town seems to have caught her eye. From there...we shall see. (wink, wink)
Squee! Where is the story set? Why?
The story is set in the fictional town of Ramble, Virginia. Why? Short answer: that's where the publisher wanted it set. I guess a Southern setting often resonates with cozy readers. Long answer: I put the town in northern Virginia, a long (torturous) commute from DC, probably not far from Berryville, VA. There's a wealth of diversity to draw from: rural residences, expensive houses, political connections, historic landmarks, Southern charm, the twang of West Virginia not far away.
I found Berryville to be the almost perfect model for an idyllic small Virginia town. That's not to say Ramble is Berryville. Ramble is a fictional place, with a quirky set of town characters and a growing murder rate.

Growing murder rate? Oh dear--for the residents, that is. Not for us, the enthusiastic readers!Tell us about the next book in the series.
The next book in the series is For Whom the Bluebell Tolls. Audrey is chosen to design the flowers for a popular wedding-themed reality show called Fix My Wedding. The bride is batty about bells and thinks the bell in the town's historic church is ideal. To complicate matters, Audrey's ex, Brad (aka Brad the Cad) is part of the crew. When one of the hosts of the show is discovered dead, Brad becomes a suspect, and Audrey is on the case once again.

Do you have any Questions you'd like to ask Beverly? Sound off below, and be entered into the drawing for a copy of Bloom and Doom.