I was just a girl when Lady Di married Prince Charles--and oh, how she made an impression on me. She was lovely, charming, flawed, and despite some of her questionable choices, I never quite got over her. Or the rest of her Windsor relations.
So naturally I was eager to visit the RMS Queen Mary, permanently docked in Long Beach, California (a fun experience all by itself) to visit an exhibit featuring Diana: Legacy of a Princess -- a Royal Exhibition. 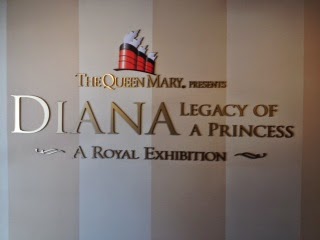 The name of the exhibit is a little misleading. It's not all about Diana; in fact, the exhibit's opening rooms ground the visitor in Windsor history, starting with the abdication of Edward VIII. You may recall he abdicated so he could marry his divorced American love, Wallis Simpson.

Via original newspaper articles and timelines to give the visitor a sense of time and place, one follows history as one walks through the exhibit at one's own pace to view thousands of interesting items (some personal, including letters, clothing, and photographs; some not, including collections of Diana dolls, replicas of tiaras and wedding bouquets, books written by Prince Charles, and commemorative plates) relevant to just about every other member of the Royal Family through to Kate Middleton, Duchess of Cambridge, and adorable Prince George.

No wonder the whole family is included, really. The ship is the Queen Mary, who was the mother of Edward VIII and George VI, Queen Elizabeth's father.

Alas, no photos are allowed inside the exhibit. Double Alas, there is no guide book available, so I cannot direct you to a place where you can experience the exhibit without being there. The best I can do is share a few things I saw and this handy dandy, 30-second Youtube video:


Needless to say, I loved the exhibit. And it broke my heart. There's something about being right in front of something personal to a historic figure that makes her real to you in a way you can't imagine.

For instance, King George VI, Queen Elizabeth's dad, was one slender man. His coronation robe is on display (a cream-colored jacket with padded shoulders, worn under the robes of state), and while it is an amazing piece of embroidered craftsmanship, I couldn't get over how lean the guy was. Most men I know could not wear that robe. Probably not even Colin Firth, who played him in The King's Speech. (You can find a photo of it on this blog. As I said earlier, photos weren't allowed and others I found online are under copyright, so I'm playing it safe.)

Also thin? Wallis Simpson, later the Duchess of Windsor. Her pink negligee is on display. (Isn't it creepy to think your nightclothes might someday be ogled by thousands?) It is sheer and there's nowhere to hide a muffin top in that thing.﻿

None of the Queen's or Queen Mother's clothes are on exhibit, but other mementos are on view, including letters. I loved peeking at the royal family's Christmas cards. Each one I saw had a photo on one side and a printed message on the other, signed by one or both members of a royal couple. Oddly, Queen Elizabeth and Prince Philip's card from 1978 shows them posing with three corgis, but none of their unmarried children. I believe Prince Andrew and Prince Edward were teenagers at the time, still clearly in the royal nest. Hmm.

Speaking of those princes, I learned their wives each had two wedding gowns made. This was done so if something happened to one dress, another was ready for the Big Day. Sarah Ferguson, Andrew's bride, and Sophie, Edward's bride, befell no trauma to their gowns, leaving us the distinct pleasure of being able to view their backup gowns. They are not copies, but rather identical twins, created by the designers of the same fabric and embellishments at the same time.

Both gowns surprised me. I knew when Fergie married her gown was embroidered with bees, thistles, the letter "A" and hearts, but on TV I couldn't see the details, nor could I make them out in photos. Now I wonder how I missed them: the embroidery is a dark silver-gray and quite a stark contrast to the ivory of her gown. (Due to copyright issues, I can't include a photo, but you can view a replica here to see what I mean about the embroidery.)
﻿

Sophie's gown is medieval in style, and I thought it looked lovely in photos. I would have liked to see the backup gown displayed without the "coat" over it, however, because the style looked plain on the mannequin. (Click here for a photo of the dress without the coat.)

Other observations? Prince Charles signs his name in such a way that in some of his letters, I couldn't tell it was Charles. Here's a link; scroll down to his signature, but this one definitely is more readable than some I saw. His wife Camilla has better penmanship, at least when signing Christmas cards.

Kate Middleton could probably fit into Wallis Simpson's clothes, if one judges by looking at her dresses on display. While the exhibit contains a replica of the "Blue Dress" she wore to announce her engagement, other dresses are original, including "The Dress" she wore when William first laid eyes on her, a sparkly, er, ensemble/tube/swimsuit cover-up she modeled. I believe this dress later sold at auction for a hundred thousand pounds. Replicas are on sale in the gift shop for over $200.
And then there's Diana. The exhibit includes letters she wrote, some of her jewels, and sadly, gifts Charles had given to her: part of a tea set was one example. There were also quite a few pieces of wedding memorabilia, including the seating chart for her Wedding Breakfast, a wedding invitation, and a program to the service.
There's also a handwritten schedule for her hairdresser, which made me laugh out loud. You see, when I was younger, my mom subscribed to Good Housekeeping, and Diana annually graced their cover. One article that stuck with me described Diana's hair routine: wash every other day "without fail" and trim every five weeks. The message was even someone like me could have fabulous hair if I followed Diana's regimen. And I've remembered that silly article all these years and it's stern "without fail" warning.

What the article didn't say is Diana had a hairdresser appointment at least 50% of the mornings during any given month, sometimes more often. I am confident Kate, Duchess of Cambridge, also has significant hair support. Remember that "casual" first photo of Will, Kate, and baby George, taken by her father? She had two people work on her hair for that casual shot.

Not that I'm judging. I wish I had somebody to do my hair for me.

But back to Diana.

Several of her gowns are on display, currently owned by various individuals and purchased at auction (before her death, Diana donated many ensembles for charity). Sigh. Just lovely, and I remembered most of them.

Diana's wedding gown, as well as her jewelry and other items, belong to her sons and are not part of the exhibition. Her famous wedding gown used to be on exhibit on her brother's estate, Althorp, where she is buried, but the exhibit closed a year ago.

I left feeling a little sad. I couldn't help wondering how some of the objects came to be included. Clearly, Diana gave away Charles' gifts for some obvious reasons, but the other items in the exhibition were sold--sometimes by people who needed the cash (as in the case of the wedding invitation). What would it be like, to write letters or invite a friend to my wedding, and then have those things sold at auction? I stood in front of each of her gowns and wished things had turned out differently for their original owner. I wondered, what if she'd known Jesus?

Fortunately, I had something to cheer me up: a nice tea.

The tea shop is located next to the exhibit, and the mango chicken salad sandwiches were fabulous. I wouldn't mind another right now.

If I get the recipe, I'll let you know. Until then, I'll be washing my hair at least every other day without fail.

**
What about you? Do you enjoy Royal Watching?

This originally appeared on Tea and a Good Book.

Susanne Dietze thinks Prince George is absolutely adorable. Her novella, Love's Reward, will be part of Barbour's Most Eligible Bachelor Collection, coming in 2015. You can visit her on her website, www.susannedietze.com
Posted by Susanne Dietze at September 08, 2014