Queen Mab and the Creative Spirit (an Inky repost)

In the midst of a dual deadline and some pretty wild changes going on in my life, I needed this reminder to LIVE creatively, originally posted back in 2009 just after we started Inkwell Inspirations. I'm sharing it again today, and I pray it encourages you to live creatively, as well!

Percy Bysse Shelley (who looks a little like Rob Pattinson aka Edward Cullen in this picture) was so fascinated by Mab she became the subject of his first major poetic work. Queen Mab is mentioned in Herman Melville's Moby Dick and Jane Austen's Sense and Sensibility. She even made it into a music video by British pop band Duran Duran in the 1980s. This mythical, magical fairy embodies the mystery of human imagination and creativity; that secret realm of the God-given soul where stories and ideas and characters and pictures made of words or paint or marble are quickened and birthed into the earth.

You might think of Mab as an image of the artist's muse, gathering the ingredients of thought, feeling, experience, memory, imagination, knowledge, wisdom, and so forth within the human heart, and stirring them into an all-new design like a master chef experimenting with recipes.

God, our creator, is a creative being, and we are made in His likeness and image, according to the Bible. As His children, we have access into that supernatural source of creativity all the time. How magical is that? 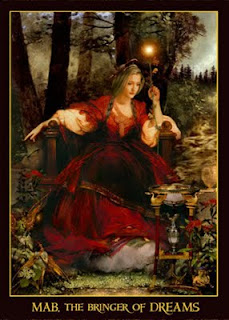 I've heard so many women say, "I'm just not creative," when it comes to crafts, or hobbies, or any sort of creative endeavor. I've talked to Christians who have squelched their "overactive imaginations" because they couldn't reconcile their creative bent with the rigid systems of church organization and religion they've been exposed to. And I have friends who discount the amazing things they do in their homes, with their kids, in their wardrobes, and their kitchens as "normal."

Life demands creativity and imagination. Whether you're a writer or a janitor, an artist or a stay-at-home mom. Whether you are developing a plot twist, or devising a way to create a scrumptious meal for six with half a bag of lentils and a frozen chicken breast. Even organization and time management require inspiration. Ministry, marriage, and obeying God's instructions to love our neighbors are all in desperate need of a fresh infusion of creative pixie dust!

Just think: Someone had a spark of inspiration and invented the Chip Clip. Martha Stewart, love her or hate her, is a master of homemaking creativity. She's turned that creative spark into a multi-million dollar industry. More than once.

Are you a perfectionist? You probably have a death grip on your creativity because you're so terrified of doing something the "wrong" way. Guess what? It's usually the people who do it wrong who create a masterpiece that outlives them and blesses the generations to come.
Are you a (what's the opposite of a perfectionist?) ... slacker? I'm willing to bet you slack off because you need inspiration to do those tasks you don't enjoy. Good news for you! God has inspiration available for everything under the sun, and He knows just what YOU need to hear to move you forward.

Whatever you set your hand to this week, whether you've started a new novel or just started the laundry, remember Queen Mab. Let the mythical fairy be a mental reminder of the wealth of creativity you carry that's just waiting to enrich and empower your generation.

This is just a segment of the complete poem, but I love the last part about her words "unheard by all but gifted ear." It reminds me of Jesus' words, "Let him who has ears to hear, hear." It's up to us whether or not we will listen to the stirrings of inspiration on the inside.

Here is a portion of Mercutio's monologue. Note the extraordinary details used to describe Mab's chariot.