Get Your Kiss on Route 66: 10 Romantic novellas on the Mother Road

For years Route 66 was the main thoroughfare across the United States. Now, in one convenient volume, experience romances from Missouri to Santa Monica as ten women experience a journey they'll never forget. Come take a romantic ride on the Mother Road!

IT HAPPENED ONE NIGHT by Jennifer AlLee
Rita Fisk runs the Durlin Hotel in Oatman, Arizona. Her predictable existence is interrupted one night when Clark Gable and Carole Lombard, newly married in Kingman, drop into the hotel to spend their honeymoon. Edgar Smith, Mr. Gable’s driver and right-hand man, insists their stay be kept hush-hush. A reporter shows up, determined to find the famous couple. As Edgar and Rita fight their way through a comedy of errors - including an appearance from the resident ghost and having to pretend to be a honeymooning couple to throw off the reporter - they grow closer. By the time the night’s over, secrets care shared and promises are made. But is Rita the kind of woman to believe in promises, and is Edgar the kind of man to keep them?

SHAMROCK RUBY by Helen Gray
Lincoln Stover follows Route 66 to Shamrock, Texas, in pursuit of his no good cousins. But what he finds is Ruby Clover, a lovely waitress at the U-Drop Inn who sends his heart and emotions spiraling in unexpected directions.It’s 1937, and Ruby has her hands full working at the restaurant and taking care of her parentless nephew. When handsome Linc Stover comes to Shamrock looking for his cousin, the baby’s deceased father, she finds herself attracted to him. But can she trust the man whose family might try to claim the child left to her when her newly widowed sister died in childbirth?

RUNAWAY SUE by Cynthia Hickey
Sue has always wanted to travel the Mother Road in her pink Mustang. She ditches the man she didn't love at the altar, tosses her veil out the car and takes off on her first real adventure. Along the way, she picks up a hitchhiker named James Deacon. A leather jacket wearing man with secrets and dreams of his own.

DONNA'S DINER by Jo Huddleston
When Donna Turner and two girlfriends leave Alabama in 1956 and head to California on Route 66, Donna runs out of money. Her girlfriends continue the journey to Los Angeles, leaving Donna in Needles, California where a dream-come-true adventure is about to happen.

ENCHANTED ENCOUNTERS by Teresa Ives Lilly
As wealthy, debutante Violet Beauchamp travels across country on route 66, she finds a small dog hurt on the road. Unwilling to leave the dog, she stops at a small Hopi Indian souvenir stand, where she is advised to go to the Holbrook Wigwam Motel. She is also given an enchanted rock, and told that the next man she sees will be the man she marries. When she meets motel clerk, Lee,although handsome and kind, she still believe she is destined to marry a wealthy man in California whom she has never met. Once Lee teaches her a lesson in humility and shares the love of Jesus Christ with her, Violet is no longer sure about marrying anyone but Lee. Will the enchanted rock give her the man of her dreams, or will God lead her into His plan for her life?

A TRIP TO REMEMBER by Gail Gaymer Martin
When Skylar Littleton stopped for the night in Tucumcari on her way to visit her estranged sister in California, her trip became literal when she tripped over a dog's leash and broke her right ankle. Her life becomes even more tangled with the dog's owner, Doug Elliot, a doctor and his pearl earring-wearing grandmother, who changed her plans and her life.

STARLIGHT SERENADE by Debra E. Marvin
The Englishman would look back one day and blame it all on Jazz…
Flagstaff, Arizona 1930. Full-time Astronomer, and part-time sharp dresser Julian Dyson didn’t discover Pluto but he does discover a nasty case of self-righteousness when a former Ziegfeld Girl’s folly threatens his good name.

SUMMER'S SURPRISE by Martha Rogers
Summer Patterson, a photo-journalist for a popular magazine, is on a mission to capture the charm and nostalgia of the old Route 66 through the West Texas Panhandle in story and picture, but when her car breaks down in a "middle of nowhere" town, her mission takes a turn she never expected. Cody Harper is a retired rodeo champ filling in as a mechanic until he can get his own ranch. Repairing Summer's foreign car will take days, so he arranges for her to stay with his grandmother Ellis. Meeting the people of McLean, Texas and riding with Cody to discover the beauty of a part of Texas she'd never seen leads her in a direction she had no plans to take. She returns to her busy life in the city of Dallas, but her heart is back in West Texas where she lost it along Route 66. Getting it back will be no easy task, especially if Cody has his way.

STRANDED WITH PEARLS by Sherri Stewart
June 16, 1962 should have been the best day of Gracie MacGyver's life. After all, it was her wedding day. But the closer she got to the altar to marry Mr. Perfect, the more she realized she was making a colossal mistake.So she bolted, leaving friends and family stunned. Taking her dad's precious car Betsy, she headed south or west--she didn't really care--wherever Route 66 took her. But the day went from bad to worse.Instead of a honeymoon in Bermuda, she spent the night in a jail cell in Pontiac, Illinois. Instead of basking on the beach with Douglas, she picked up trash alongside Route 66 to fulfill her community service hours. To make matters worse, that poor excuse of a small-town sheriff seemed to derive great pleasure from tormenting her. She couldn't help it if she was a big-city girl.Thrust into a world where everyone knew her business, she wasn't sure she'd be able to adjust to a slow-paced country life while working off her punishment. Certainly, her sojourn in Pontiac was just desserts for abandoning Douglas at the altar, or was it a gateway of opportunity for deeper relationships and a new love?

TURQUOISE TREASURE by Niki Turner
Movies are king in 1956, and Gallup, New Mexico, on Route 66, is paradise for producing Hollywood B-movies. Veronica Scott wants nothing more than to be an actress, but her polio-afflicted leg has kept her off the casting rolls. Cooper Dean’s only interest in the movie industry revolves around finding justice for his wife’s death. When Cooper and Veronica are cast as secondary characters, much to their surprise, each sees an opportunity to help the other. But their cooperation will put Veronica in danger, and she’ll have to play the role of a lifetime to save them both. 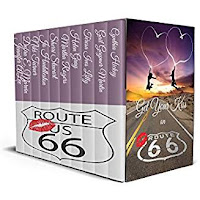