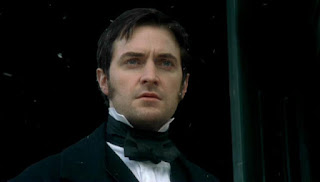 This post was originally intended to be about an author that my family has read for years. Her most famous work was made into a movie a few years ago, and I had intended to say, “Don’t judge her work by the movie. The book was better.”

The book was better. We hear that all the time when a novel is adapted for screen. It’s become such a truism in our culture, you can buy t-shirts, coffee mugs, and phone covers with the phrase emblazoned on them.

My youngest discovered the truth of that this past summer. He wanted to see the Harry Potter movies. Since some of them are rated PG-13, and he’s not yet 13, we told him he could only see them once he’d read the books. And that was when he learned—the books were better.

So, I thought it might be fun to turn this on its head and ask, Can you think of any instances where you liked the movie better than the book it was based on?

The only one that comes readily to my mind is North and South. If you’ve read the book by Elizabeth Gaskell, you probably noticed the script writers changed the ending. Personally, I think they tied up the lose ends better than Gaskell did.

The floor is now open for your nominations!
Posted by C.J. Chase at December 15, 2017