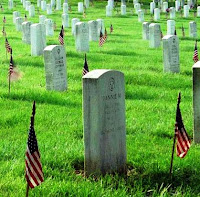 Today is Memorial Day in the US. Not just Memorial Day Observed, but the bonafide, May 30th thing, the original day Americans set aside to honor deceased service members. Commemorations for fallen soldiers began in the years immediately following the Civil War when family members decorated the graves of loved ones who had died during the conflict. And then in the way of all governments who can't leave well enough alone, Congress tampered with it. In 1971, Congress moved the observance to the last Monday in May. Though some still observe the day's purpose of solemn remembrance, for many more Memorial Day has become just another three-day weekend, the start of the summer season.

For years, my family observed the holiday with a drive to the Capitol for the annual National Memorial Day Concert, an evening of patriotic music and solemn stories. And then we left the Washington, D.C. area. We still try to catch the concert on TV (8:00 pm Eastern on PBS), but it isn't the same as being there, and over the years, our "observation" has become more of the yard work and picnics type.
"Those who don't know history are destined to repeat it," wrote British statesman Edmund Burke. Given the current state of civics knowledge, we may soon be testing Burke's statement.
Several years ago, the Intercollegiate Studies Institute (ISI) administered a series of exams to college students and the population at large, testing their knowledge of American history, government, foreign affairs and economics. The results? 71% scored an F. The average score was a 46%. Among seniors at 25 of the most selective colleges (Harvard, Yale, Princeton, et al), the average score was a whopping 59%.

Just thinking of those people in the voting booth is enough to give an informed, concerned citizen nightmares. We are a society losing our collective memory. And, it seems, our collective mind.

For over 20 years, US Senator Daniel Inouye has led a movement to restore the significance of Memorial Day by moving the observance back to May 30. Ten years ago, Congress established the National Moment of Remembrance to be observed at 3:00 pm local time throughout the country on Memorial Day. One can't help wondering, however, in a country where only 21% of ISI's test takers correctly identified "government of the people, by the people, for the people" as a line from the Gettysburg address, how many people even know about the minute of silence?

Sadly, ignorance extends beyond the history of country. Over 80% of Americans may claim to be Christian, but only a fraction of them know much about Christianity. A Pew Research Center study in 2010 reported that fewer than half of American Protestants could identify Martin Luther as the leader of the Protestant Reformation. Worse, the knowledge crisis extends to the Bible itself. The Bible might be the best selling book of all time, but according to a Gallup survey, only 16% of American Christians read it daily. That might explain why half of the incoming freshmen at Wheaton College -- the most prestigious Christian college in America (average SAT scores in the 600-700 range per subject)  -- didn't know the Christmas story is found in the book of Matthew.

The Bible is clear that we are to learn God's Word and teach it to our children. "These commandments that I give you today are to be upon your hearts. Impress them on your children. Talk about them when you sit at home and when you walk along the road, when you lie down and when you get up" (Deuteronomy 6: 6-7, NIV). Over and over the prophets warned of the punishments sure to follow if the people ignored God's commands. 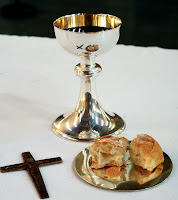 Remembrance is important. "This is a day you are to commemorate; for the generations to come you shall celebrate it as a festival to the Lord--a lasting ordinance" (Exodus 12:14) God told Moses before the first Passover. Centuries later, Jesus became our Passover Lamb. On the night he was betrayed, he led his disciples in a Passover dinner and told them that henceforth, every time they partook in communion, they were to do it "in remembrance of me."

Fortunately, we have a God who who remembers His promises, even when we forget ours. And even better, we have a God who promises to forget. "For I will forgive their wickedness and will remember their sins no more." (Jeremiah 31:34).

This Memorial Day, I challenge you to remember.

How are you observing Memorial Day? Do you attend any nearby observances?