by Niki Turner
"Well-behaved women seldom make history."
~Laurel Thatcher Ulrich, American historian, Harvard professor, Pulitzer Prize winner
Rarely do we encounter a feminine history-maker, record-breaker, or world-changer who conformed, complied, yielded or acquiesced to the societal norms and cultural expectations of her day. Instead, it's the women who followed their hearts, often enduring hardship and persecution, whose names are written in our history books.
Nellie Bly, Clara Barton, Florence Nightingale, Harriet Tubman, Amelia Earhart ... those were the biographies I read as a girl. As an adult, reading through the Bible for the first time, I met more history-making women: Rahab, Deborah, Ruth, Esther, Zipporah, the daughters of Zelophehad, Achsah, all the Marys, Elizabeth, Anna, Priscilla, and multiplied others. 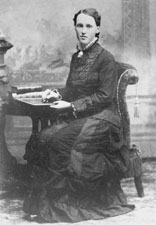 I encountered another history-making woman this weekend, quite by surprise, while creating a Colorado history quiz for my homeschooled seventh-grade son. I was surprised I'd never seen her name before, or heard of her accomplishment.
Julia Archibald Holmes and her husband were among the first group of prospective prospectors to set out from Lawrence, Kansas, for Colorado, in hopes of striking it rich in the widely exaggerated gold fields of the 1850's. According to the textbook, Holmes, 20, " had walked rather than ridden from Kansas in order to build up her endurance." If you remember your American history, the vast expanse of western Kansas to the Rockies was (rather aptly) dubbed "The Great American Desert" by early explorers. And here goes Julia...
Upon reaching Colorado, Julia and her perpetually nameless husband, with two other men, started up Pikes Peak on August 1, 1858, headed for the summit. Pikes Peak, one of Colorado's 54 "fourteeners" (mountains with a summit of more than 14,000 feet above sea level), was something of a landmark for Colorado's gold-seekers. They reached the 14,115-foot summit on August 5, 1858, making Julia the first white woman to climb Pikes Peak, quite an accomplishment, especially for a woman in that era.
An early snowstorm forced the group to descend, and soon Julia and her hubby (who IS this guy?) were traipsing (yes, on foot) to New Mexico, where Julia eventually became a correspondent for the New York Tribune, a suffragette, reformer, and supporter of abolition.
What surprised me more than her decision to walk 500 miles across eastern Colorado and western Kansas? Every reference mentions her wardrobe. Seriously. And all because she opted to climb Pikes Peak wearing (gasp) bloomers and a short skirt. If that weren't scandalous enough, she added moccasins and a hat and called the get-up her "American outfit."

Holmes met with resistance for everything from her choice of clothing to her decision to climb the peak. Her response should be our response when we're told we can't do something, can't accomplish something, or should just turn back and give up. (Like writing, for example!)

"I have accomplished the task which I marked out for myself . . . Nearly everyone tried to discourage me from attempting it, but I believed that I should succeed." ~Julia Archibald Holmes

Serious question: What have you been discouraged from doing? Are you doing it anyway? Do you believe you can succeed? If not, why?
Non-serious question: Have you ever read about a history-making man whose clothes made the news with his achievement? Except for John the Baptist and his camel hair shirt, and maybe Joseph's coat of many colors, I can't think of any!
(FYI: Blogger is having some sort of hiccup today with comments. Before you click "submit," copy your comment! If you attempt to comment and get an error message, try right-clicking on the comment button and select "open in new window" from the options. That SHOULD work!)
Posted by Niki Turner at May 24, 2011