Tomorrow is the anniversary of T.E. Lawrence’s death. Known to the world as Lawrence of Arabia, he was an archaeologist and an adventurer. A spy for the British throughout Arabia during the Great War, he could pass as a native of the region. After that war he fought for an independent Arabia. Coming home to England only after his vision for a united Arabian nation was dashed. In 1927 he wrote his memoirs and they created a sensation throughout the staid, somewhat damp England of the 1920s. 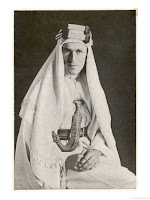 A man of contradictions he worked by day as a mechanic for the RAF. In 1932, he published his own translation of The Odyssey under the assumed name of T.E. Shaw. He died from injuries sustained in a motorcycle accident. But he has been immortalized in books and the classic film, Lawrence of Arabia. Not to mention the numerous cameo appearances he has put in since his death. He even showed up in an episode of The Young Indiana Jones. A character who was inspired in part by his legend.

All of this got me to thinking about reader’s preferences when it comes to novels. I personally love to see “real” characters interwoven in historical fiction. To me it helps to round out the story world. But it can be done well and it can be done poorly. And as with every other aspect of life, tastes vary.

I think the best use of an historical figure in fiction occurs when their legacy is honored, but bolstered by little known facets or facts that enhance the reader's understanding of who the person was beneath their fame. I don't like known facts to be contradicted by fiction. Like giving George Washington a tendency to beat Martha just because the author thinks it adds to the tension. By all means, feel free to have a character like that if it works for you story. Don't make it a well-known and beloved historical figure.

Some of my favorite portrayals of real-life characters are from Brock and Bodie Thoene's World War II novels. They use several historical personalities from Churchill to William Randolph Hurst. And the King's Speech was a great recent movie that was a fictionalized account of a real person's life and struggles, and it totally worked!

Do you like to see real-life characters in a novel? What if they are the main character? Is there a point when it feels like too much?
Posted by Lisa Karon Richardson at May 18, 2011