I'm not a big follower of Oprah, but since Wednesday was the last episode of The Oprah Winfrey Show, I thought I should watch it. It was an hour with no surprise guests, no gifts under the seats or cars waiting for people in the parking lot. It was just Oprah, talking to the audience, sharing her heart.

One thing she said that really struck me was about addiction. How no matter what kind of addiction a person has - to drugs, alcohol, shopping, food, cigarettes, sex, etc. - it all boils down to one common thing: a feeling of unworthiness. 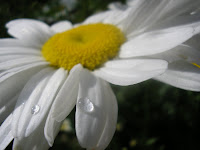 A lot of us spend our lives feeling less than...less beautiful, less intelligent, less important, less desirable. We think that until we reach the ideal of what we should be, we are not worth being loved. But God has loved us from the very beginning, and then some. Before you were even a gleam in your father's eye, He knew you.


Then the word of the LORD came to me, saying:
“ Before I formed you in the womb I knew you;
Before you were born I sanctified you;
I ordained you a prophet to the nations.”


The same words He said to the prophet Jeremiah are true about each of us. He knew us before He formed us in the womb. The implications of that are astounding. Not only that He knows who we are, but that He formed each and ever one of us. He decided which sperm needed to meet which egg to create exactly the person you are. He designed your genes, your DNA, every tiny detail of your being.

Still not convinced? Look at the words of David:


For You formed my inward parts;
You covered me in my mother’s womb.
I will praise You, for I am fearfully and wonderfully made;
Marvelous are Your works,
And that my soul knows very well.

Fearfully and wonderfully made. By an all-powerful, all-knowing God. A God who took the time to work out every detail of your creation.