Book Recommendation-Secrets of the Heart

By Lisa Karon Richardson
It’s tempting to try to cram all regency romances into a single box. But Jillian Kent’s Secrets of the Heart isn’t concerned with the typical backdrop of balls and arranged marriages.
Madeline Whittington has suffered a series of losses that have made her withdraw from society and although her official mourning period is over, she’s having a difficult time delving back into the frivolous round of fashion and fetes. 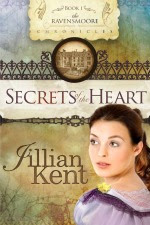 The new Earl of Ravensmoore, Devlin Grayson, knows all about hanging on the fringes of society. As a younger son he had looked forward to a career as a physician. Then both his father and brothers passed away and the earldom devolved to him. Faced with a decision he chose to scandalize society by continuing to train for the profession he loved.

The two serious outsiders seem made for one another, but Madeline blames Devlin for her beloved father’s death. He was there and Madeline is certain that if he hadn’t botched the care, her father would still be alive and the odious Lord Vale would not be courting her mother.

Toss in a mysterious woman who won’t speak, a creepy lunatic asylum, and the labyrinthine mind of a dangerous opponent and you have a story that draws more from Jane Eyre than Jane Austin.

You can find Secrets of the Heart in stores like Lifeway and Barnes & Noble as well as online here.

And here’s a note from sweet, former Inky, Jill:

I'm Jillian Kent. I'm more than enthusiastic about the release of my first book, Secrets of the Heart, The Ravensmoore Chronicles, Book One. I've been writing for years and now the dream is coming true. I'm also a full-time counselor for nursing students and have a masters degree in social work. I'm fascinated with human behavior and how our minds work. Because I work in contemporary society I thought it would be fun and interesting to explore what might have happened in a lunatic asylum in Regency England and that's just a snippet of how my story idea was conceived. I hope you will escape into the past with me and find faith for the future. I think you'll enjoy the journey.

I’m revising my second book in The Ravensmoore Chronicles, Chameleon. You can read the first chapter of Chameleon at the end of Secrets of the Heart, but be warned I’ve now revised chapter one of Chameleon and it won’t be the same. It will be even better! J I’m also writing Book Three, Mystery of the Heart and trying to get the word out about Secrets.

Lady Victoria Grayson travels to London for the first time in her adult life after surviving a chronic illness that kept her homebound as a child . Now she has been invited by her elder brother, Devlin, Lord Ravensmoore, to join him in London and catch up on some of the things she has missed during her growing up years.

Snoop, as she is fondly referred to by her brother, is pulled into a hornet's nest of intrigue soon after she arrives. Her brother has been summoned by the Prince Regent along with Jonathon Denning, Lord Witt, who trained and led a group of spies during the war, to help ferret out the identity of the individual attacking members of Parliament.

This is Lisa again: You all know my penchant for spies so I can’t wait until Chameleon comes out! You can find out more about Jilly and her upcoming releases here.