From Family Research a Historical Novel is Born

Novels come to us in many different forms as each of us follow our own paths to becoming a writer. For novelist Thomas Blubaugh the idea for his first novel came to him as he studied his family history, and this began his journey as an author. 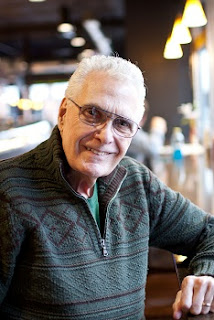 Both of my grandfathers died before I was born. I know very little about either of them. I’ve felt the absence all of my life and the older I got, the bigger the void. When my mother died in 2005, I was left with only one relative on her side of the family that would know anything about my mother’s father—my maternal grandfather. This is when I started my research.
I persuaded my aunt to let me interview her. We sat down at her kitchen table, her with a decreasing memory, me with a tablet and a tape recorder. For two hours I pulled every detail from her that she could remember. At the end of the interview I had a few facts; he was born in Georgia on the east side of the Black Sea; he was a Jewish Russian Cossack soldier; he defected from the Russian Army when something happened in his company that he knew he’d be blamed for because he was a Jew; he came to America through Boston in 1910; he met my grandmother in New York City where he was a street car conductor; he tutored Hebrew in exchange for learning English at New York University; he eventually became an insurance salesman; and he died of ALS a year before I was born in the same hospital where I was born.
I also found out he had a brother named Israel, but I could not get names of his parents or any other information because he and my grandmother spoke nine languages between them and did not speak in English when they talked about the homeland or family. This was common of Jews coming from Russia for fear they’d be found out and be deported. I’m sure they didn’t realize they were robbing me of my heritage.
I thought about this information and, although I didn’t intend to write a novel, I started writing about my grandfather. Most of my life I’ve written nonfiction and about subjects I knew very well. Writing about my grandfather, however, was drastically different. I started researching heavily. I knew nothing about Georgia, where he was born, Russia where he was a Cossack soldier, the Cossacks, the Russian army, or Russian history. As I dug in, I found facts I had matched with things that were happening in Russia at that time and this spurred me to dig deeper. 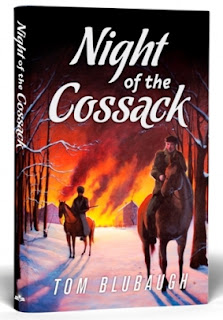 I found myself not just writing for me, but for my children and grandchildren. The story was beginning to take shape, and I found myself deeply entrenched in my grandfather’s life as I imagined it. I didn’t know anything about show and tell so it was all a narrative.
I went online and found a Christian writer group at Yahoo. I sent part of my manuscript to one of the members, Michelle Buckman, who is a published writer. She responded back that she felt I was on to something and recommended I contact a local critique group. I did—they agreed. From that time forward, I met with them one night a week and shared 1250 words, which they analyzed. I started learning principles of fiction writing and continued digging away at research.
Five years after I interviewed my aunt, Night of the Cossack was published by Bound by Faith Publishers. Had I realized so few people seem to know what a Cossack is, I might have titled it differently. Never the less, it is what it is.  It is now on amazon.com as an ebook and paperback and on barnesandnoble.com as an ebook. The reviews I’m receiving on amazon.com are excellent. I have a Facebook page—Tom Blubaugh and a book page—Night of the Cossack. I also have a website and a blog.
I wouldn’t exchange the experience of writing a fiction novel for anything in this world. I am, however, that writing the novel was significantly easier than building a platform and getting my name and my novel out to the world.
~~~~~~~~~~~~~~~~~~~~~~~~~~~~~
Night of the Cossack is a compelling adventure by Tom Blubaugh about a teenager who is forced to grow up quickly. The main character, Nathan Hertzfield faces many life or death situations during his saga.Join Nathan on his exhilarating journey through parts of Russia and Europe during the early 1900's. Don't miss the adventure and suspense in the riveting story, Night of the Cossack.
Tom Blubaugh, author of Night of the Cossack, is a freelance writer. He has written nonfiction most of his adult life. He resides with his wife Barbara in Southwest Missouri where he is currently writing fiction. Tom and Barbara have six children and fourteen grandchildren. In addition to writing, Tom loves macro photography. He on the Board of Directors at Jericho Commission, Inc. Tom believes that retirement is about continuing to fulfill God's purpose.
Tom Blubaugh, Author of Night of the Cossack--Read the first chapter.
Get a signed copy by ordering here. FREE shipping.
eboook for Kindle available at Amazon.com
ebook for Nook available at Barnes & Noble
Visit My Blog
~~~~~~~~~~~~~~~~~~~~~~~~~~~~~~~~
Do you have any interesting family stories? What's your heritage? Feel free to leave any questions for Tom as well.