Today we welcome guest author Christine Lindsay. Her debut novel with WhiteFire Publishing has been receiving rave reviews.  Join us as she shares the fascinating history that inspired it. 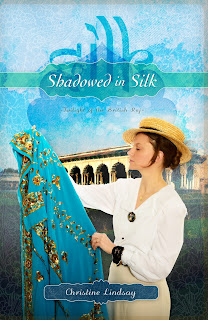 So much research went into writing Shadowed in Silk that it’s hard to choose just one aspect. From biographies of military personnel I discovered specifics like the galvanized bathtub my Major Geoff Richards would bathe in, the intricacies of his Sam Brown belt and his khaki drill jacket. And one of my favorite details, what it ‘feels’ like to sit on a cavalry charger as it jumps over irrigation canals in Northern India.
Or I could share details that make up the life of an English or American woman, such as my heroine Abby Fraser living in India at the beginning of the last century. Details such as the Vinolia soap she bathed with, or the chapattis spread with marmalade she served to her son, Cam.
But I prefer to tell you about the inspiration behind one of my secondary---but oh so integral---Indian characters, Miriam. This tiny 50-year-old Indian woman is one of my favorites. Miriam’s back-story is that she is a former Hindu widow who turned to Christ. Since her conversion she rescues abused and abandoned women and children, and runs a small clinic and orphanage. It is there that Miriam teaches Abby that God does not wish His daughters to submit to cruelty within their marriages.
The inspiration behind my fictional Miriam is a the real Pandita Ramabai, an Indian woman who lived about 100 years ago.
I first heard about this true-life heroine, Ramabai, while sitting in a mid-week prayer meeting about 30 years ago. This brilliant Indian woman had died in 1922, but she had done so much for women and children in India that England awarded her the Kaisar-I-Hind Gold Medal. India has since issued a commemorative stamp in Ramabai’s honor, and she was given the honorary acclaim of ‘Pandita’ in Hindu tradition, meaning ‘learned master’. 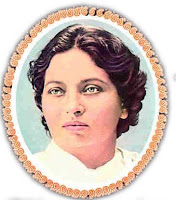 Born into a high caste Hindu family, Ramabai’s father broke with tradition and taught her to read. This was the beginning of my heroine’s search for enlightenment. As a family they walked the length of India, Ramabai’s eyes were opened to the incredible suffering of Indian women and children.
After her parents and siblings died, Ramabai also broke with tradition and married a lawyer of a lower Hindu caste, but he died of a cholera leaving her alone with a tiny daughter.
One day, looking through her husband's papers she found a Bible, and found fulfillment to her spiritual search in the person of Jesus Christ. But Ramabai didn’t just add Jesus to a list of Hindu gods to worship. She came to the realization that Jesus is the only way to God the Father.
This prompted Ramabai to translate the Bible into her local language. To name just a few of her accomplishments—she started the first  Braille School, promoted the need for female medical doctors, and was the founder of the Ramabai Mukti Mission, a home for sexually abused Hindu widows and children. She was a great social reformer in India long before Gandhi.
I hope you’ll be able to read my debut novel, Shadowed in Silk, which reveals my fascination with British ruled India, but also the inspiration of Ramabai. Enjoy the trailer below.

Christine Lindsay writes historical Christian inspirational novels with strong love stories. She doesn’t shy away from difficult subjects such as the themes in her debut novel SHADOWED IN SILK which is set in India during a turbulent era. Christine’s long-time fascination with the British Raj was seeded from stories of her ancestors who served in the British Cavalry in India. SHADOWED IN SILK won first place in the 2009 ACFW Genesis for Historical under the title Unveiled.
Posted by Dina Sleiman at July 26, 2011