It Really IS A Wonderful Life

I'm following in the footsteps of my pal, Lisa, and venturing over into the world of movies. Because, honestly, I can't let the holiday season go by without tipping my hat to that perennial favorite, It's A Wonderful Life. 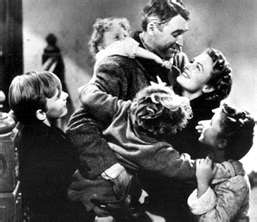 If you're not familiar with the story, you were probably in a coma for the last 65 years. But just in case... here's the rundown of the 1946 movie. Jimmy Stewart stars as George Bailey, a good-hearted man who spends his life yearning to get out of the tiny community of Bedford Falls. George has big plans, wants to travel, see the world. But every time he gets close, something happens to hold him back. Finally, things get so bad that George contemplates suicide. That's when a clumsy angel named Clarence comes into the picture and shows George what the world would be like if he'd never been born. By the end, George realizes that his life hasn't been a failure. Far from it. He is rich in all the things that matter, and his family and friends are all better for knowing him.

To some, this movie is the epitome of schmaltz and corniness. But I love it. I love the black and white simplicity. I love the heartfelt performances by Stewart and his love interest, Donna Reed. And I love that it hits the core of the human condition: We all want to know that our lives matter.

Because he couldn't escape life in a small town, George Bailey saw his life as small. But so many of his actions had big, far reaching results. When his brother, Harry, fell through the ice as a child and George pulled him out, he didn't just save his brother's life. One day, Harry would fight in the war and win the medal of honor for saving the lives of countless soldiers. By saving Harry, George also saved the lives of all those men. Like ripples on a pond, the moments of George's life spread out, touching people he would never meet.

The movie is fiction, but it communicates a powerful truth. All of us matter. God has a purpose for each one of us. Our lives are measured not just in what we achieve, but in how we touch others. I can guarantee that you have done (or will do) something this week, that will change someone's life. It will seem insignificant to you, of no importance in the grand scheme of things. You may never see the result and know how important it was. But that doesn't matter. You've made your mark on the world.

It really is a wonderful life. Live it. Enjoy it. Savor it.