Monday starts the long, long post-holiday period that can be such a letdown after all the fun and excitement we get between Thanksgiving and New Year’s Day. For that reason, I decided to review a movie made for kids and for us grownups who are, as C. S. Lewis says, “old enough to start reading fairy tales again”: Disney’s 2010 animated feature film, Tangled. 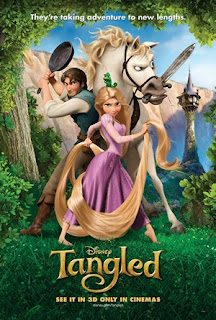 Based on the traditional story of Rapunzel, Tangled is the tale of a young girl who has spent her whole life in a high, doorless tower, seeing only the woman she knows as Mother Gothel. But while Mother Gothel claims she keeps Rapunzel confined for her own protection, the truth is that she does it because it’s Rapunzel’s magic hair that keeps Mother Gothel forever young and beautiful.

Still, Rapunzel dreams of seeing more than just her tower room, and when a handsome thief called Flynn Rider scales the tower to hide from the law and the other thieves he’s double-crossed, Rapunzel decides to make the most of her unexpected opportunity. She convinces a him to escort her from the tower and into the village so she can witness for herself the annual ceremony held in remembrance of the baby princess who had been stolen from the king and queen eighteen years before. Adventure, betrayal, romance, sacrifice and, yes, tears ensue.

I love this movie. Okay, the Alan Menken/Glenn Slater songs are terribly forgettable, and the character of Mother Gothel (voiced by Donna Murphy) seems rather grating and overdone at times. Sometimes the visual effects, particularly Rapunzel’s vast amount of hair (especially when wet), are not as convincing to me as I would like. But all those things are unimportant when compared with everything that’s right about this film.

The animators manage to say a great deal with just a facial expressions. In fact, two of the most endearing characters in the movie (the horse, Maximus, and the chameleon, Pascal) do not speak at all, but we have no problem telling exactly what they’re thinking. There’s also plenty of sly humor and lots of really exciting action sequences. And the scenes of the village celebration truly radiate joy.

Best of all, the two lead characters, Rapunzel and Flynn, are a genuine delight both individually and as a couple. Rapunzel (voiced by Mandy Moore) manages to be sweet without being saccharine and spunky without being annoyingly militant. Her abrupt swings between joy and guilt once she actually leaves her tower room, knowing Mother Gothel will not approve, are a hoot. And Flynn (voiced by Zachary Levi) is a real charmer, remarkably like his probable inspiration, the irresistible Errol Flynn. Together they find there’s much more to life than what they have previously known or expected. 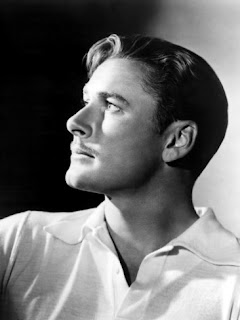 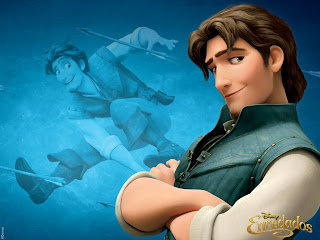 I found myself smiling all the way through this sweet, sassy fairy tale, so full of life and joy and innocent romance.

Who knew, right?
Have you seen Tangled? What recent movies have you enjoyed?