Are We There Yet?

Today, many folks travel with GPS devices that guide them through each turn, intersection, and crossroads. I’m old enough to remember when people traveled with maps.

In fact, I still have a rather large collection of maps (and no GPS yet). I love maps. Perhaps it’s my visual nature that needs to “see” what is ahead. Show me a map, and I’ll be there. Tell me directions, and I’ll be lost after I turn out of my driveway. (Of course, I could be resisting a GPS because I dislike the idea of someone telling me what to do.)

Travel is so much easier with directions of one sort or another. But life doesn’t come with a detailed map for the entire journey. We know our ultimate destination, but how do we get there? 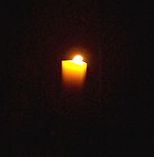 Consider the above verse from Psalms. The Psalmist compares God’s word to a lamp or light on our path. Traveling with a lamp or a light implies we must walk through darkness. Have you ever gone camping? Not in a luxury hotel-on-wheels thing, but the real deal where you have to walk to the bathroom in the dark. You may have noticed that your flashlight only lit the path for a few feet in front of you.

Paul tells us we only see through a glass darkly for now. The Psalmist doesn’t compare God’s word to the sun, but to a lamp. It will light our way through the darkness, but we won’t see the entire path—just the next step.

Consider the newly freed slaves heading for the Promised Land after centuries of bondage in Egypt. God didn’t give them a GPS or even a map. He led them one day at a time by a pillar of cloud day by and a pillar of fire by night.

He didn’t even take them on the shortest route because He didn’t want them crossing Philistine territory. In fact, if you take a peek at a physical map of that part of the world (did I mention I love maps?), you’ll notice God’s chosen path led them right through the desert. Those Israelites already grumbled at every chance they got. Can you imagine how they would have protested had they seen God’s itinerary ahead of time? Most likely, they would have never set out, and they—and their descendants—would have missed out on a great blessing. 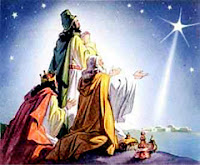 We know less about another group who traveled on faith alone. Matthew tells us that wise men from the east followed a star to this same Promised Land. They didn’t know where they were going, just that their destination would be a newborn king.

What lies east of Judea? Another desert. We don’t know how they’d learned about Judaism or why they would want to worship the King of the Jews. We don’t know how far they traveled or how long their journey took. We don’t know what hardships they faced along the way. But we know they came prepared with expensive gifts.

Noah, Abraham, Joseph—the Bible is replete with examples of people who trusted God’s leading without knowing what was ahead. Hebrews 11, the famous “faith chapter,” lists many more.

All of us walk through difficult times. If you’ve ever gone through an especially dark time, you probably remember taking it “one day at a time” because you hadn’t the emotional strength to look any further along the path.

But it’s important to remember that no matter how dark the path seems at times, God is right there with us. In his most famous psalm, David claimed, “though I walk through the valley of the shadow of death, I will fear no evil: for thou art with me.”

Faith is allowing God to lead us. We don’t know how the journey will go, but we know where it will end.

Then Jesus spoke to them again: “I am the light of the world. Anyone who follows Me will never walk in the darkness but will have the light of life.” – John 8:12

After leaving the corporate world to stay home with her children, C.J. Chase quickly learned she did not possess the housekeeping gene. She decided writing might provide the perfect excuse for letting the dust bunnies accumulate under the furniture. Her procrastination, er, hard work paid off in 2010 when she won the Golden Heart for Best Inspirational Manuscript and sold the novel to Love Inspired Historicals. Her next book, The Reluctant Earl, will be out in early 2013. You can visit C.J.'s cyber-home (where the floors are always clean) at cjchasebooks.com
Posted by C.J. Chase at June 03, 2012