Last year, Moody Publishers caught my attention when they introduced the River North fiction line with a lineup that included Texas Trails, A Morgan Family series.

They describe Texas Trails as “…a six-book series about four generations of the Morgan family living, fighting, and thriving amidst a turbulent Texas history spanning from 1845 to 1896. Although a series, each book can be read on its own.”

I really enjoyed these books since the first one came out last year. Now that all the books in the series have been released and some are showing up on sale at on-line bookstores, I thought I'd tell you about them and not just what I thought about them. Following is the book cover and blurb for each book in the Texas Trails series. 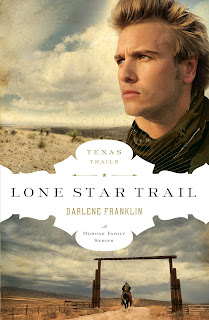 Judson (Jud) Morgan's father died for Texas' freedom during the war for independence. So when the Society for the Protection of German Immigrants in Texas (the Verein) attempts to colonize a New Germany in his country, he takes a stand against them.

After Wande Fleischers' fiancée marries someone else, the young fraulein determines to make new life for herself in Texas. With the help of Jud's sister Marion, Wande learns English and becomes a trusted friend to the entire Morgan family.

As much as Jud dislikes the German invasion, he can't help admiring Wande. She is sweet and cheerful as she serves the Lord and all those around her. Can the rancher put aside his prejudice to forge a new future? Through Jud and Wande, we learn the powerful lessons of forgiveness and reconciliation among a diverse community of believers. 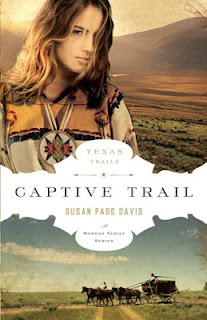 Taabe Waipu has run away from her Comanche village and is fleeing south in Texas on a horse she stole from a dowry left outside her family's teepee. The horse has an accident and she is left on foot, injured and exhausted. She staggers onto a road near Fort Chadbourne and collapses.

On one of the first runs through Texas, Butterfield Overland Mail Company driver Ned Bright carries two Ursuline nuns returning to their mission station. They come across a woman who is nearly dead from exposure and dehydration and take her to the mission.

With some detective work, Ned discovers Taabe Waipu identity. He plans to unite her with her family, but the Comanche have other ideas, and the two end up defending the mission station. Through Taabe and Ned we learn the true meaning of healing and restoration amid seemingly powerless situations.

When Riley Morgan returns home after fighting in the War Between the States, he is excited to see his parents and fiancee again. But he soon learns that his parents are gone and the woman he loved is married.

Riley takes a job at the Wilcox School for the blind just to get by. He keeps his heart closed off but a pretty blind woman, Annie, threatens to steal it.

Through painful circumstances, Riley and Annie learn that the loving and sovereign hand of God cannot be thwarted. 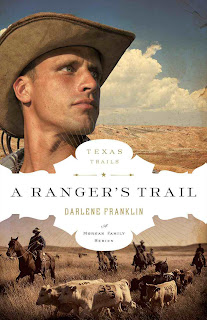 In 1875 Buck Morgan rode into Mason County with the Texas Rangers to quell the violence stirred up by the actions a vigilantly mob. The Hoo Doo (or bad luck) War erupted as suspected cattle rustlers were murdered by an angry mob. Former ranger, Scott Cooley, gathers a gang to seek vengeance for the murders.

Suspected of cattle rustling, Leta Derrick's husband was murdered by the mob a year earlier. Now she is siding with the rogue ranger, Scott Cooley and refuses to help Buck Morgan stem the tide of violence.

Will their actions fuel the fire of vengeance? Or will Buck and Leta strike an accord that leads to more than just peace? 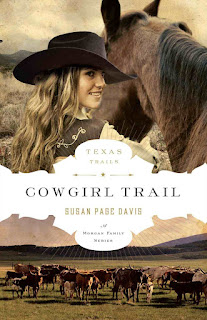 In 1884 Maggie Porter returns to the Rocking P Ranch. The sanatorium was not able to save her mother and now her father's health is failing. When the cowboys walk off the job leaving no one to drive the cattle to market, head ranch hand, Alex Bright, cannot convince the men to stay. How could Alex let this happen?

Maggie is desperate to save the ranch and she turns to the town's women for help. The new cowgirls must herd, rope, and drive the cattle to market. With only two days left, outlaws charge the small band of cowgirls in an effort to start a stampede. The cattle begin to scatter. Will they lose everything? Where will their help come from?


Book 6: End of the Trail by Vickie McDonough 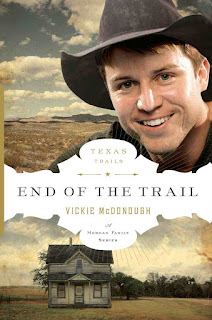 In 1896 Brooks pulls into the town of Shoofly to take refuge from a storm and befriends John Langston in the local cafe. A high stakes poker game ends with Brooks holding the deed to John’s ranch with one condition – Brooks must promise to take care of Keri. Brooks agrees and assumes that Keri is a horse.

Overcome by guilt, Brooks return to the cafe to give back the deed but finds John on the floor dead. Brooks heads off to take care of John’s ranch and is ambushed. With a noose around his neck, hands tied behind his back he offers a prayer up to God.

A stunning shot breaks the rope and frees Brooks. The bullet is delivered from the rifle of a lady on horseback. But the lady is Brooks’ enemy too. Will she and Brooks put aside their differences and work together?


If you're looking for reading enjoyment in a historical western series with a variety of stories based on 19th century western life, then this is an very good choice. The accomplished authors know their material and craft.

I liked how the origin of the morgan horse breed was incorporated into the series.

Some readers may find the 'girl power' in Cowgirl Trail hard to take in, but in my own research, I've read several books and articles on women who did a man's job because it needed to be done and there was no one else to do it. And I really liked the way it was done in this story. Refreshing.

To learn more about the Texas Trails series (including a family tree and a detailed map!), visit www.texastrailsfiction.com.

The River North Fiction blog has more information on these books including author interviews and interesting research facts. I couldn't find a category or label list, but there is a search box at the top of the page. Type in the title of the book you're interested in and all the pertinent posts will appear.

Here's a recap if you want the titles together for when you go shopping:

And finally, if you want an example of what to expect, here's a quote I 'lifted' from one of Vicky McDonough's posts on the River North blog... 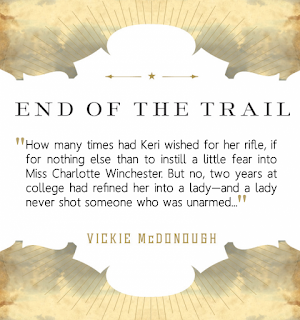 Have you read any books in the Texas Trails series, or from River North? What did you think? 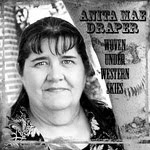 Anita Mae Draper is retired from the Canadian Armed Forces and lives on the prairie of southeast Saskatchewan, Canada with her hubby of 30 plus years and 2 of their 4 kids. She writes stories set on the prairies of Saskatchewan, North Dakota, Montana and Wyoming. Anita Mae has semi-finaled in the Historical Romance category of the ACFW's 2011 Genesis contest and finaled in the Inspirational category of the 2011 Daphne du Maurier, the 2011 Fool for Love, the 2011 Duel on the Delta and 2009 Linda Howard Award of Excellence contests. Anita Mae is represented by Mary Keeley of Books & Such Literary Agency. You can find Anita at http://www.anitamaedraper.com/
Posted by Anita Mae Draper at November 16, 2012