I'm writing this post on the Monday before the election. I'm concerned about how folks are going to react once the votes are counted and the results are in.

This has been one of the most negative, angry, unpleasant campaigns in my lifetime. No matter who wins, the other side will be unhappy and disgruntled. Division and strife are running rampant in America, and I believe that's more dangerous than any particular administration or who has the Congressional majority or which Supreme Court justice is appointed.

With all this negativity around us, what IS our responsibility as Christians, those who are attempting to live according to the Bible and set a good example in the way we react and respond to life, including political discourse and the state of our nation?

Here are a few things to consider...

1. No matter who is sitting in the Oval Office, God is still God and all His promises are still in effect.  Donkeys, elephants... Jesus trumps them all. 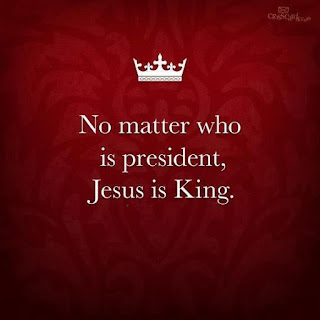 2. Our battles are not with flesh and blood, but with spiritual forces that are thwarted by the prayers of the saints. Legislation can't change hearts and rarely has an effect on behavior, but prayer and Godly demonstrations of love DO change lives, every day. Is your faith in a Supreme Court decision, or in the supernatural power of prayer and worship?


For though we walk in the flesh, we do not war according to the flesh.


3. Jesus, during his earthly life, lived in an occupied nation. Not just occupied by a couple different political parties in disagreement, but a nation actually occupied by a foreign army. Yet we never see him railing against the Romans or stirring up a PAC to promote His perspective.

Is it right for us to pay taxes to Caesar or not?"
He saw through their duplicity and said to them, "Show me a denarius. Whose portrait and inscription are on it?"
"Caesar's," they replied.
He said to them, "Then give to Caesar what is Caesar's, and to God what is God's."
They were unable to trap him in what he had said there in public. And astonished by his answer, they became silent.


4. Paul conducted his ministry under the rule of some of the most horrible, vicious, anti-Christian leaders the world has ever known, yet he wrote in his letters to the church that we are to respect and honor those who are in authority and to speak well of them.

Let every soul be subject to the governing authorities. For there is no authority except from God, and the authorities that exist are appointed by God. Therefore whoever resists the authority resists the ordinance of God, and those who resist will bring judgment on themselves. For rulers are not a terror to good works, but to evil. Do you want to be unafraid of the authority? Do what is good, and you will have praise from the same. For he is God's minister to you for good. But if you do evil, be afraid; for he does not bear the sword in vain; for he is God's minister, an avenger to execute wrath on him who practices evil. Therefore you must be subject, not only because of wrath but also for conscience' sake. For because of this you also pay taxes, for they are God's ministers attending continually to this very thing.  Render therefore to all their due: taxes to whom taxes are due, customs to whom customs, fear to whom fear, honor to whom honor.


5. The wrath of man does not bring about the righteousness God desires. Getting all stirred up and angry over politics will not, according to the word of God, produce the results we all want to see in our nation: peace, unity, wholeness, prosperity, etc. Anger and offense are inefficient, ineffective means of creating lasting change.

... for the wrath of man does not produce the righteousness of God.


6. Grumbling and complaining are not high on God's list of character virtues. In fact, the OT folks who griped about Moses (who didn't do everything right) were eaten by the earth they stood upon (Number 16). Life lesson? If you don't have something nice to say, it really IS better to keep your mouth shut, even on Facebook!


Do all things without complaining and disputing, that you may become blameless and harmless, children of God without fault in the midst of a crooked and perverse generation, among whom you shine as lights in the world, holding fast the word of life, so that I may rejoice in the day of Christ that I have not run in vain or labored in vain. Phil 2:14-16 NKJV

As I sit here, contemplating the election, I am reminded of the importance of walking in love at all times, of looking past every "flesh" label, of praying for those who are in authority over us no matter who they are or what I think about them, and, above all, of trusting God... HE alone is my King of Kings, my Lord of Lords, and He has made us citizens of His eternal kingdom.

May every genuine believer rise up in the true spirit of Christ Jesus following this election, and demonstrate God's grace and mercy and goodness, no matter who ends up in the Oval Office.