The Language of the Fan

"Men have the sword, women have the fan and the fan is probably as effective a weapon!" --Joseph Addison

Cleopatra's slaves used them to keep her comfortable as she sailed on her barge. The Chinese associated them with mythical characters. The folding variety we all recognize originated in Japan, but China became famous for them. Once they arrived in Europe around 1550 with traders from the far east, they became a plaything of the nobility. Nowadays, I seldom see them, except on warm summer Sunday mornings when a woman inevitably puts one to use during church services.

As a historical writer, fans are an essential accessory to my female characters. (And through the post I'm sticking to European--primarily British--fans.) I knew they were used for flirtatious purposes, and I knew they were beautiful, but who knew they had their own language?

First, a bit of background. Fans became an essential accessory for well-bred females, and they no doubt own different fans for mourning and various types of social events. In the early 1600s, fans were often "fixed," or made of feathers attached to a handle: they did not fold. By the end of the century and into the eighteenth century, folded fans had come into their own, and it appears that if a lady used a fixed fan, she labeled herself as not at all up on things. Or common. Tsk tsk.

Folding fans seem to have come in three types: the plain old folding type (yes, the name sounds obvious) is where a set of sticks is fastened together at one end and pleated material (silk, leather, or other fabric) is fastened to the sticks. (Feathers and lace, by the way, went in and out of fashion.)


Ladies also used cockade fans, which are pleated paper attached to two sticks. They open into a full circle with the end sticks forming a handle--although I have not seen them in portraits or read of ladies using them at balls. However, I am not an expert. Just passing along the info.
There were also brisé fans, where separate sticks are fastened together at one end like the folding fan, but they did not use fabric or leather. Rather, the sticks were painted individually to create a scene or were ornamental, and were often held together at the top with a ribbon. It was much harder to paint on these fans than a folding fan.

Painted fans were certainly popular, and often depicted pastoral, Asian, mythological, or Biblical scenes. In the eighteenth-century through the Regency period, Vernis Martin fans were valued. Vernis (French for varnish) was a technique developed by the Martin brothers, who hand-painted the scenes. This Vernis Martin Fan had mother-of-pearl guards.


Apparently, ladies painted images on their own fans, too: Princess Augusta, aunt of Queen Victoria, painted one that now belongs to her Majesty, Queen Elizabeth II. According to documentation, it was created around 1790 and the medallions painted on the panels were done by "one of George III's daughters."

Here enters the so-called Language of the Fan.The fan was no longer a pretty frippery, or a cooling device, but also a method to convey secret codes.

The notion probably began as an advertising technique by fan-makers, but Fan Languages were published in contemporary magazines and books on etiquette. Charles Francis Badini wrote a book called Fanology or Ladies’ Conversation Fan, which was published in 1797. It listed many gestures along with the secret codes they conveyed, including:

Placing fan on left ear: I wish to be rid of you
Carrying fan in right hand in front of face: Follow me
Drawing fan across the forehead: You have changed
Drawing fan through the hand: I hate you
Threaten with shut fan: You are imprudent
Gazing at shut fan: Why do you misunderstand me?

Perhaps he misunderstands because this gets so complicated, m'dear. While many a female no doubt practiced these motions before the looking glass, one wonders how many gentlemen scratched their bewigged heads in utter cluelessness. Also, how many matchmaking mamas were so oblivious that they wouldn't understand what it meant when her daughter threatened a suitor with a shut fan?

The Language of the Fan seems to fallen out of vogue for a generation: the Regency. Fans were still an essential accessory, however. This Regency lady is ready for a magical evening at Lord and Lady Fabulous' ball. She is wearing her gown of pink crepe, a toque on her head, elbow-length kid gloves, her satin slippers, and carries--of course, her fan. She may not use it to send secret codes, but no fashion-minded, status-conscious British lady of the 18th and 19th century would attend a ball without one.
Rolinda Sharples' painting, Cloak Room, Clifton Assembly Room, was painted in 1817. Look at all these Regency ladies holding their fans! It might be difficult to view, but many of the fans appear to be white or sheer.

The Victorians took fans to a whole different level. French maisons created fans for the very wealthy. Tablitiers carved exquisite sticks, and famous artists painted (and signed) fans. As the language of flowers became popular again, no doubt the language of the fan refreshed, as well.

Alas, fans as a fashion statement seem to have gone the way of the elbow-length glove and the bonnet. So for now, my experience with gorgeous fans will have to be limited to my imagination, when my characters use them to their advantage.

But to you, I will drop my fan. (Translation: we will be friends. Although that totally isn't what it sounds like to me.) 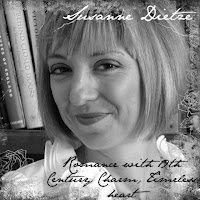 Susanne Dietze began writing love stories in high school, casting her friends in the starring roles. Today, she writes in the hope that her historical romances will encourage and entertain others to the glory of God. Married to a pastor and the mom of two, Susanne loves fancy-schmancy tea parties, travel, and curling up on the couch with a costume drama and a plate of nachos. She won first place in the Historical category of the 2011-2012 Phoenix Rattler, and her work has finaled in the Genesis, Gotcha!, and Touched By Love Contests. Susanne is represented by Tamela Hancock Murray of The Steve Laube Agency. You can visit her on her website, www.susannedietze.com.
Posted by Susanne Dietze at November 19, 2012