For those of you who didn't get a chance to experience the reenactments and celebrations of the 200 yr old event called the War of 1812, take heart because it didn't actually end until the signing of The Treaty of Ghent on December 24th, 1814. Which means there are more events coming up.

One of those events will be commemorated on June 22, 2013 with the opening of the Laura Secord Legacy Trail at Niagara-on-the-Lake, but here I am getting ahead of myself.

Laura was born on September 13th, 1775 in Great Barrington, Mass, the eldest daughter of Thomas Ingersoll who had attained the rank of Major in the American Revolutionary War.

Reputedly, Thomas received a personal invitation to settle in Upper Canada from an old friend, Governor Simcoe, who had once resided in the United States. Thomas accepted and emigrated with his large family to Upper Canada where Governor Simcoe granted him 66,000 acres of land and named him justice of the peace of Oxford County.

Thomas Ingersoll then moved to Queenston where he built and ran a tavern where locals could find refreshment. It seemed a young Loyalist's son by the name of James Secord began to spend a lot of his time at the tavern which worried his family until they relized it wasn't the liquor James went to spend time with, but the travern keeper's daughter. In 1797, barely 2 years after arriving in Upper Canada, Laura married James Secord and settled down in Queenston as a merchant's wife.


By the time the War of 1812 began, Laura and James had 5 children ranging in age from 2 to 10. And when war begins, husbands leave their loved ones and go fight for their families, their freedom, and their beliefs. And herein lies another story because in Oct 1812, James was wounded in battle and word came back to Laura. She left her small children with family, headed to the battlefield, and brought her wounded husband home. He'd been shot in the shoulder, but it was the musket ball lodged in his hip which kept him bed-ridden for life.


When the Americans invaded Queenston in May 1813, any male over the age of 18 was marched back to the States as a prisoner-of-war, but mercifully, disabled James was left behind. The Secord farmhouse, however, was taken over as a billet for 3 American soldies and Laura took on the additional task of serving them.

One night in June, Laura overheard the soldiers planning an attack on Lieutenant James FitzGibbon at Beaver Dams, some 12 miles away. At this stage of the war, the Americans had control of most of the Niagara Peninsula and FitzGibbon was bravely hanging onto his sparse British outpost.

Someone had to warn the British of the impending attack and with James unable to do it, Laura resolved to try. The next morning, she tucked her kids in bed with James, snuck past the pickets guarding their farmhouse, and began her trek. By road, the trip was 12 miles, but fearing military patrols, Laura struck off cross country where wild cats, bears, and quicksand threatened her mission.


After 2 days of walking over 20 miles, Laura found FitzGibbon and relayed her message.

With the help of their Mohawk warrior allies, FitzGibbon and his 50-man contingent won the Battle of Beaver Dams and held their post against the invading Americans.

And so Laura Secord became a heroine, right? Well, not right away. Lt. FitzGibbon's official report was quickly dispatched to his superiors without a mention of Laura Secord. Laura returned to James and bore him 2 more children. James received a small pension because of his war injuries, yet the Secords lived in poverty until James was appointed registrar, then judge (in 1833), of the Niagara Surrogate Court, and finally became collector of customs at Port Chippawa.

When James died in 1841, Laura was left without financial resources. She ran a children's school out of her Chippawa cottage for a brief period, and petitioned the government for a pension and other favours. She was unsuccessful. She also petitioned FitzGibbon for help and in 1820, he wrote the following testimony:

"Then in 1827, FitzGibbon wrote that Secord had come to him “on the 22d day of June 1813,” and “in consequence of this information” he had positioned the Aboriginal warriors to intercept the Americans. In 1837, he testified that Laura Secord had warned him of an American attack but he provided no specific date and he wrote, he said, “in a moment of much hurry and from memory.” Laura Secord’s petition for a military pension was refused." (www.eighteentwelve.ca)

When Laura Secord was 85, the Prince of Wales (the future Edward VII) made his 1860 visit to Canada. In the words of www.uppercanadahistory.ca, "Laura Secord went to the office of the clerk of the peace at Niagara a month before the prince's arrival, where she insisted on signing the address over the objections of the clerk. She was supported by a local newspaper that heralded her heroics saying she had done more for her country than half the soldiers and militiamen engaged in it. She supplemented the address to the Prince with her own account and that of her husband in the patriotic service of their country. Prince Edward learned of Laura's twenty mile walk from the petition describing her war-time service. Of all who presented an address to the Prince, her name was the only woman's among the veterans of War of 1812. On his return to England, Prince Edward sent Laura 100 pounds in gold, the only financial reward she ever received for her service."

Accepted as a heroine - finally - by the future king of England, public recognition grew quickly. But as the legend of her escapade grew, people embellished it for amusement and almost destroyed the reputation she'd fought so hard to attain.

Laura Secord died in 1868, at the age of 93, and was buried beside her husband in Drummond Hill Cemetery, Niagara Falls. Laura's granddaughter described her famous grandmother by saying, "She was of fair complexion, with kind brown eyes, a sweet and loving smile hovering about her mouth." James Fitzgibbon remembered her as a person "of slender frame and delicate appearance, "which hid the strong and persistent will of a fearless fighter, a pioneer woman of courage, endurance and resolution, whose determined sense of duty is honoured still in the annals of Canada. (Both sources www.uppercanadahistory.ca)

Over the years, Laura Secord has been recognized as a heroine in several ways, the first which is the bronze bust of a young Laura which was added to her gravestone (above) in 1901.

In 1992, Canada Post issued a series of 4 stamps commemorating Canadian heroes. One of those postage stamps depics Laura Secord running through the woods to warn the British. The caption reads, Legendary Patriot in both english and french. 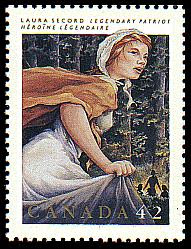 Several monuments have been created in Laura Secord's honour including the Laura Secord monument right in her home town of Queenston, Ontario.


The description for the above postcard reads, "Located in front of a low stone wall overlooking the lower Niagara River ( in distance) and the village of Queenston, the monument is set at the end of a walking path; three plinths of graduating sizes form the base; topped with a column and then a conical top; an oval plaque is centered in the column; a foot high wrought iron fence surrounds the entire monument; mature trees to the left and right of the monument; round formal flower bed in front of the monument; a wooden and metal bench seat is located behind the monument facing the view; title in red print top left; Crest of the British Empire reading On whose Dominion the sun never sets top right corner". Source: Niagara Falls (Ont.) Public Library Postcard Collection

I went looking for an updated photo of the Laura Secord Monument at Queenston Heights, and found this one on the Niagara Parks website:


What? The image on the 1927 postcard shows the Niagara River in the background, but the current website image for Niagara Parks shows the river right there. Can the slight difference in camera angle make that much of a difference? The Niagara Parks image is promoting the spot as perfect for weddings. They couldn't do if the location shot wasn't real. So, I went back to searching Google and found this treasure which shows the land meeting the river just off to the right.


A second monument was created by sculptor, Marlene Hilton Moore. It stands 12 feet tall at the Valiants Memorial in Ottawa.


The farmhouse where James and Laura were forced to live and care for the billeted American soldiers (shown above) is now the Laura Secord Homestead museum.

And finally, in 1913, a chocolatier named Frank P. O’Connor opened a small candy store in Toronto. He named his store, Laura Secord because he wanted his customers to think of courage, devotion, and loyalty when they saw his products.


I've just realized this post is long enough already, and I've only now reached the point where I want to mention The Laura Secord Legacy Trail. But I don't want to tuck a brief note about it at the end of a long post, either. Especially when the planned event is 7 months hence. So, I will schedule another post for that topic and any other Laura Secord commemorative events scheduled for next summer.


Are you wondering what the citizens of Great Barrington, Mass think of Laura Secord? Tell me what you think and I'll tell you what some of them have said.