As you can tell by my surname, I married a guy with a bit o’ German in him.

My hubby's paternal grandfather emigrated from Dresden Saxony to the U.S. through Ellis Island, and although he embraced his new country, he kept many of his homeland’s customs—including the Christmas Pyramid, or Weihnachtspyramide.

Maybe you’ve seen smaller versions: they are shaped like wedding-cakes or towers with one or more tiers, small enough to sit on a table-top or large enough to light up the town square. Figures resting on each platform depict a scene from Christmas or everyday life: angels, a nativity, toys or something from the workplace. The tiers rotate around a central drive shaft like horses on a carousel, driven by the rising heat of candles placed on or around the body of the pyramid, which spins a propeller at the top of the pyramid.


Originating in the mountain region of Erzgebirge, Pyramids have been in use since the Middle Ages--although not necessarily as Christmas decorations. It's possible that the first Pyramids were modeled after the horse-powered gins in the local mines. Pyramids with movable mining scenes were displayed for the wedding of the Saxon prince in 1719.

Sometime around 1800, they became primarily a Christmas item (possibly predating the tradition of the Christmas tree), although the name “Pyramid” didn’t come about until after the Napoleonic campaign saw soldiers return from Egypt in the late eighteenth century. It became a traditional for the head of the household to create one for his firstborn's first Christmas.

That's what happened in my husband's family. The Dietze pyramid pictured above, which sits in the front window of my father-in-law’s house, was carved by my husband’s grandfather in the late 1920’s from linden wood, using a coping saw. He used figures imported from Germany to decorate the four tiers.

It is no longer driven by candle heat, which made the platforms spin too fast. As you can see from the photo, it is electric now, wired in 1934 to be lit by electric bulbs (which are now vintage and tricky to find). In 1939, a new adjustment was made when my husband's grandfather installed a record turntable to rotate the platforms.


Ready for a tour? Let's start at the bottom, which displays the Birth of Jesus in Bethlehem (this tier does not rotate). One half features Joseph, the Magi, and Mary with Baby Jesus on her lap. 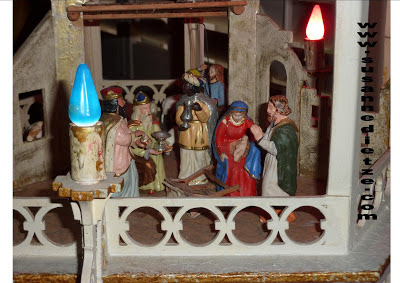 The other half of the lowest platform depicts a shepherd and his sheep, lingering just outside the stable where Jesus was born. You can see one of the Magi behind the central blue light, and in the upper left quadrant, an angel hovers over the shepherd. 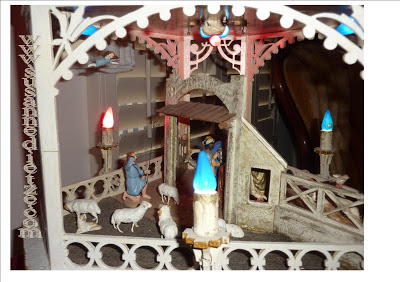 Up a level from the nativity scene, a traditional German hunting scene is shown. The hunter rests his rifle (and his dogs) while the forest animals go about their business. Some of the animals are quite perky--especially the fox, who has a squirrel in his mouth. 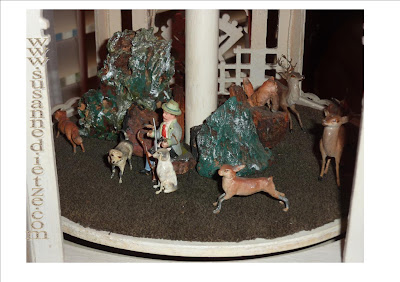 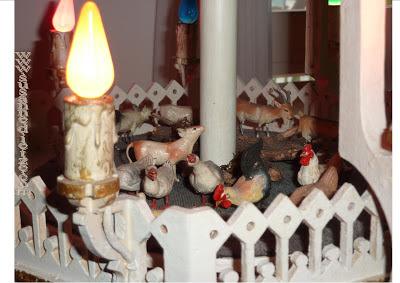 On the top platform, gnomes (not elves) are busy getting ready to help Sinter Klaus prepare for Christmas Eve. I like how the gnome in orange is propped on the edge with a clarinet-type instrument. 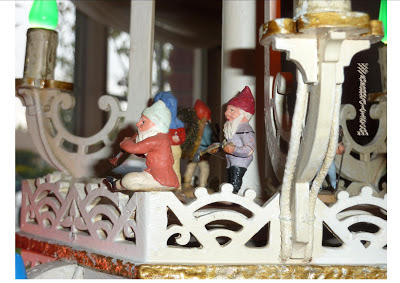 The pyramid is crowned with the message, Ehre sei Gott in der Hohe, or honor to God in the highest. Housed within, just under the propeller, are three tiny bells. Their tones echoed through the house while my husband drifted off to sleep as a boy, and their notes still signify Christmas to him. 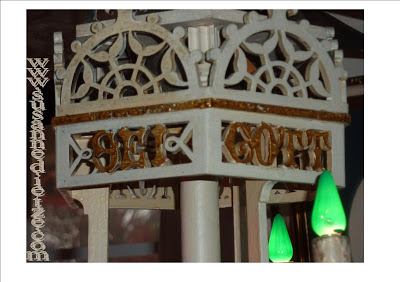 Remember what I said about huge outdoor pyramids? Below, I’ve included a you tube video of one in Fredericksburg, Texas. This one features Nutcrackers, a nativity, and some nice Christmas music.

Every family has precious heirlooms, and treasures or traditions that mean Christmas to them. With each marriage and birth, new traditions arise. Christmas morning, my favorite cranberry bread is served alongside my husband's traditional stollen, and alas, we have no Pyramid of our own. But the tradition of the Pyramid holds a special place in our hearts and memories of Christmas past.

What about you? What are traditions you’ve inherited from your family? What traditions have you invented for your children?

I'll share a few of our foodie traditions in the comments, but here's one of my favorite new family traditions that's come with my kids: The Toys Visiting Baby Jesus. This picture is a few years old, but "friends" still have a way of creeping into the stable to pay homage to the Newborn King. 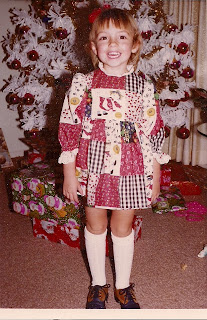 Susanne Dietze began writing love stories in high school, casting her friends in the starring roles. Today, she writes in the hope that her historical romances will encourage and entertain others to the glory of God. Married to a pastor and the mom of two, Susanne loves fancy-schmancy tea parties, travel, and curling up on the couch with a costume drama and a plate of nachos. She won first place in the Historical category of the 2011-2012 Phoenix Rattler, and her work has finaled in the Genesis, Gotcha!, and Touched By Love Contests. Susanne is represented by Tamela Hancock Murray of The Steve Laube Agency. You can visit her on her website, www.susannedietze.com
Posted by Susanne Dietze at December 24, 2012