One of the most frequent questions a writer gets is: “Where do you get your ideas from?” It’s not an easy question to answer because ideas come from everywhere. Half-remembered conversations, TV news, people watching, good old-fashioned research.

There’s almost always some nugget that provides the impetus for a story. A brilliant little core. But it takes a lot of work to melt down the nugget, refine it and spin it into gold. Unfortunately, I can’t think of many stories that sprang full born into the mind of a writer like some sort of reverse Minerva.

The most common way a story is worked into shape is by asking questions. Lots and lots of questions. Seriously, writers are like toddlers. Ever answer provokes another why!

I discover who my characters are by asking “why.” Why does she respond like this? Why does she desire that? Why would she do such a thing?

Plots are developed by asking “what if.” What if the letter is never delivered? What if the ship sinks? What if the murderer figures out she’s on to him?

Getting the answers to the questions is a thrill. It’s the sort of rush that makes having to pitch the story to an industry professional worth the effort.

So let’s start with a nugget—It’s the 1950s and a young woman is hired to ghostwrite a Nancy Drew mystery, but as she is working on the manuscript she encounters a real life mystery.

Now if you’re up for it, let’s play story builder. There are lots of questions to ask and try to answer. Many I haven’t even thought of yet. Some of the ones I have thought of concern the heroine. She has to be flawed but likable. Is she excited about her writing assignment or does she just need the money while she tries to write the great American novel? What does she want more than anything else in the world? How does she grow through the story?

The nugget idea indicates that there needs to be some element of mystery. What central mystery could a single young woman encounter in the 1950s? That will probably change based on whether she’s living in New York vs. Palm Beach vs. Omaha vs. San Francisco so another very important question is where might the story be set?

In my opinion no story is complete without at least a hint of romance, so how does the heroine meet her hero? What kind of hero is he?

Yeah… there’s lots of work to do if we were really going to work with this idea until it was in shape to possibly turn into a story!

I’d love to hear what you would do with that nugget. I bet no two of us would come up with the same story in the end.

If you write differently, tell us about your process. We’d like to hear about that too! 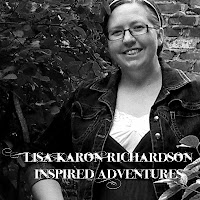 Influenced by books like The Secret Garden and The Little Princess, LISA KARON RICHARDSON’S early stories were heavy on boarding schools and creepy houses. Now, even though she’s (mostly) grown-up she still loves a healthy dash of adventure in any story she creates, even her real-life story. She’s been a missionary to the Seychelles and Gabon and now that she and her husband are back in America, they are tackling a brand new adventure, starting a daughter-work church in a new city. Vanishing Act, co-authored with Jennifer AlLee, is coming September 2013. And is the second in the Charm and Deceit, series from Whitaker House. She also has a novella coming out September, 2013 from Barbour entitled “Midnight Clear,” part of the Mistletoe Memories collection.