One Short Day at the Waldorf

For our 20th wedding anniversary, hubby and I enjoyed a trip to New York City. He actually "won" the trip through the insurance company he sells for. 'Twas an incentive prize. During the mornings, he attended training seminars, and I enjoyed the sites and tastes of Manhattan. 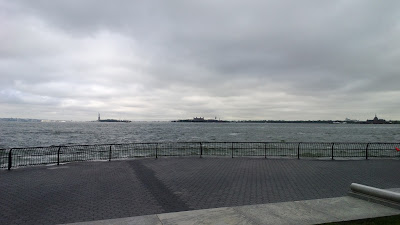 During one of "organized" tours, our guide took us to a small park that's relatively unknown to tourists. From here we could see the Statue of Liberty (left) and Ellis Island (middle). On the right side of the photo is another stately building. 60% of immigrants arrived in New York then took the next train out of it through that station. A lady in our tour group shared how her mother arrived from England as a War Bride. Her first "stop" in America was that train station.

The writer in me stopped listening to our tour guide and began pondering writing a War Bride story. In fact, if my cell service hadn't been so non-existent on the island, I would have begun googling right then and there about Englishwomen to came to America as War Brides. 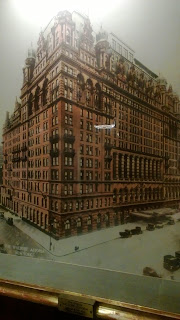 During our visit to New York, we stayed in the Waldorf Astoria. We also visited the spot where the original hotel stood -- 34th Street and Fifth Avenue. Now standing on that piece of property is the Empire State Building. The photo on the left is a drawing of the original hotel that is beautifully framed and hung in the lobby near the gift shop.

In 1931, "The Unofficial Palace of New York" was built on its present location. At 47 stories, the new Waldorf became the tallest, largest hotel in the world, with 31 elevators, 1413 rooms, and 36 private dining rooms. The staff numbers approximately 1700 individuals. The kitchen, once the largest in the world, is still one of the largest in New York City. Around the hotel, there are numerous framed historic photos. My hope was that I could buy a book with all the photos in it. Thus I made a trip to the gift shop. Nope. Although they did have a great book on historic NYC hotels. 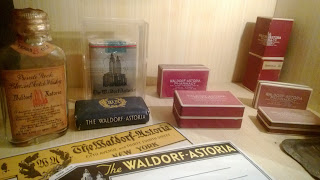 On the lobby level, one can find some glass display cases holding historic hotel artifacts like . . .

What do you think could be in the red pharmacy boxes?

That's an old key display. Crazy thing is that up until 1983 when they switched to key cards, the hotel still used keys. Even more of a crazy thing is that the Waldorf's locksmith remains one of the busiest people on staff.

One of the photos I accidentally deleted from my phone is an old sign with the words:


The difficult immediately.
The impossible takes a few minutes longer.

That particular sign hung in the main kitchen for 40 years. Still today, one can see the hotel's motto in several places.

No two rooms look alike in the Waldorf. Yet every year 250 rooms are refurbished. 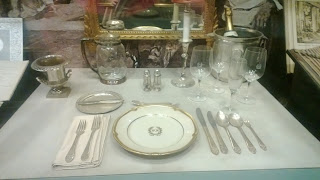 The silver and china patterns in this photo were created expressly for the Waldorf. The write-up about this place setting describes it as "timeless" and with "exactly as much silverware as you will need." Thus I felt like a redneck because generally we set the dinner table with "exactly as much silverware as" we need, also known as "a fork." This place setting includes an oyster fork, soup spoon, salad fork, meat fork, and dessert spoon and fork (at top of plate).

I have one more photo I want to share. It's of Ledger of Special Events, 1915. 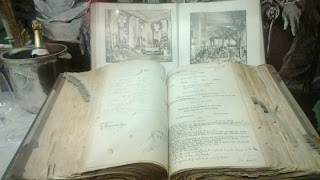 Each page in this 487-page book describes a single event in detail. Wedding breakfasts to a national banquet. From the first boutonniere to the last cup of coffee. And the back of the page shows the calculations for final cost. For the historical author, the book is a treasure trove of details about the Gilded Age. The volume preserves fascinating evidence about food, wine, prices, and customs. During one party with 585 guests, Manhattans and Martinis were served before supper; each dinner table had Four Quarts of Champagne and Two Quarts of Beer; and after supper, the host provided 1000 cigars, 4000 cigarettes, and souvenir statuettes for all. Final Bill: $3,718.85.

Anyone have an idea how much money that's equal to today?

But not all parties at the Waldorf were that costly. A young lady hosted a midnight dance party in a Waldorf Apartment, with the dining room arranged as a parlor, and Green Room to be used for dancing. Cost for cakes, ice cream, coffee, and music was a modest $27.00.


QUESTION OF THE DAY: Ever been to New York City? What was your favorite place to visit? To eat at? Did you see a Broadway show? Visit Times Square? If you haven't ever been, would you like to stay in a historic hotel like the Waldorf or a modern, newfangled one? 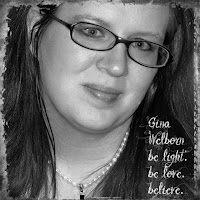 RWA-FHL Chapter President Gina Welborn worked in news radio scripting copy until she pursued her dream of writing romances. She is a 2009 ACFW GENESIS historical romance finalist and a 2007 RWA GOLDEN HEART® inspirational finalist. Her Barbour novellas are in Highland Crossings (2/12), A Cascades Christmas (9/12), and Mistletoe Memories (9/13). Her novels include The Heiress’s Courtship (Harlequin Heartsong, 1/14), A Bride By Design (Abingdon Press, 2014) and Tuxedo Park Protector (9/14).  A moderately obsessive fan of Community, Duck Dynasty, and Once Upon a Time, Gina lives in Oklahoma with her pastor-husband, their five Okie-Hokie children, five (and counting) rabbits, and two Labradors that don’t retrieve much of anything.