The Undead vs. the Un-Dead 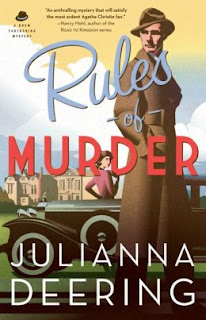 To the angel of the church in Sardis write: These are the words of him who holds the seven spirits of God and the seven stars. I know your deeds; you have a reputation of being alive, but you are dead. (Revelation 3:1, NIV)
You probably won’t be shocked to learn that death plays a part in a book entitled Rules of Murder. The main characters grapple with the violent deaths of people close to them, and these struggles are the catalysts for the changes they make over the course of the book.

Few things focus the mind like attending the funeral of someone who died too young and too suddenly. Funerals force us to confront the notion of an afterlife and the possiblity that there is a fate worse than physical death. Jesus himself warned, Do not be afraid of those who kill the body but cannot kill the soul. Rather, be afraid of the One who can destroy both soul and body in hell. (Matthew 10:28, NIV)

With a setting of 1930’s Britain, Rules of Murder is historical without being unfamiliar. Characters drive cars, listen to radios, and talk on telephones. However, the evangelical zeal that characterized Britain’s abolitionist and missionary movements of the 19th century have moderated into comfortable, routine religious practices.

Drew Farthering, Julianna Deering’s (aka Inkwell’s own DeAnna Julie Dodson) charming amateur sleuth, is a prototypical English gentleman of his day—possessing a good education, good manners, and a good fortune. Oh, he still acknowledges the existence of a deity (unlike some of his Oxford professors and classmates), but he doesn’t particularly seek a relationship with God. He attends church—sometimes, at least. He’s a nice guy with decent morals. But his faith is an intellectual endeavor, not a transformation of the heart. He does the right things and knows the right lingo, and it all looks good—on the outside.

In one sense, this propensity to pay lip service to our faith feels very modern, very relevant. Upwards of 80% of Americans claim Christianity as their religion, but fewer than half that number attend church regularly. The numbers are even worse in Drew’s Britain, where only about 0.5% of the Anglican church’s members actively attend weekly services. And while nearly 90% of Americans own a Bible (and most of those own more than one), only 13% read it daily.

This desire to look good to others while still not surrendering to God is as old as humanity itself. A quick walk through the Bible produces example after example, from Cain in Genesis to the church at Sardis in Revelation.

Do not be deceived, Paul tells us in Galatians. God is not mocked, for whatever one sows, that will he also reap. We may fool those around us, but God sees our hearts. And often he lets us reap the hypocrisy we sow. Secrets have a way of coming out in the end, and the sins we do in private often have a way of eventually bringing us down in public. If you don’t believe me, just go look at the headlines this week. They are full of salacious stories about several well-known politicians whose private lives will probably end their careers.

In Rules of Murder, Drew learns several startling secrets about his family and himself, information that challenges his very concept of himself. Fortunately, rather than becoming cynical, he begins to evaluate his spiritual condition.

In mythology, the undead are beings which are dead, but behave as if they are alive. But did you know we can actually reverse our deadened spiritual states? You could say we have an opportunity to become un-dead. Unlike physical death, there is a cure for spiritual zombie-hood. I know your deeds; you have a reputation of being alive, but you are dead. Wake up! Strengthen what remains and is about to die, for I have found your deeds unfinished in the sight of my God. Remember, therefore, what you have received and heard; hold it fast, and repent. (Revelation 3:1-3, NIV)

You can read Drew Farthering’s story in Rulesof Murder by Julianna Deering. For a chance to win a free copy, leave a comment with a spam-proof version of your email address.