Last week my family spent over 40 hours in our mini-van driving my daughter to college in Oklahoma. Needless to say, we needed some good entertainment to keep us occupied, and we found great entertainment as well as thought-provoking subject matter in Nikki Arana's The Next Target, which (with a little technical know how from my husband) the kindle read to us over the van's speakers. 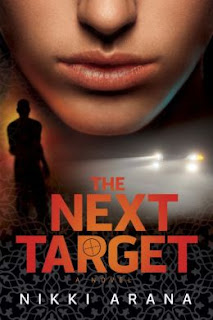 Here is the official blurb:

It only took one bullet. Austia's friend and student fell dead. And with a glimpse of a newspaper headline, the young and recently widowed Austia knows more about what happened than the police. From that fatal night, Austia’s secret outreach to the U.S. Muslim community—in the guise of English language classes—becomes a target. Local Muslim extremists set their sights on ending her ministry and even her life. And the women she ministers to will be next.

A thick web of deceit closes in around Austia, and her circle of friends becomes smaller by the day, even as she finally opens herself to the idea of falling in love again. But who can she trust? Facing a spiritual battle that proves more treacherous than it at first seemed, Austia’s convictions are tested to their limits and her heart becomes primed for breaking. She must ask herself: how much she will risk to stay true to her herself, her faith, and to the lives of the women she serves?

What I loved about the book:

It kicked off with a bang--quite literally--and immediately drew us into this world of intrigue. And it gave a very exhaustive and educational view of the complex Muslim world. Austia had an amazing heart for these people. She is a true example of Christ on earth. Only at one brief point did the teaching aspect of the book become a touch heavy handed, but still it remained interesting, and was soon on to more twists and turns.

This book was great for the whole family. It had action, suspense, and romance, all the while dealing with an important issue. Mind you, my youngest family member is eleven, and it would be too violent for younger children. But he often paused from playing his video games to ask us significant questions about the culture and characters that proved the book had his mind working overtime.

Throughout all of this, Nikki provides a thrilling, well-paced story. The ending is full of excitement and will keep you guessing right up until the satisfying conclusion.

Do you know much about Islam? Do you desire to learn more? In addition to Nikki's wonderful novel, don't forget that my women's fiction take on the Muslim culture, Dance from Deep Within, will be coming out with WhiteFire in October, and my music CD about the Muslim people is available now at http://acryforpeace.com.

Dina Sleiman writes lyrical stories that dance with light. Most of the time you will find this Virginia Beach resident reading, biking, dancing, or hanging out with her husband and three children, preferably at the oceanfront. Since finishing her Professional Writing MA in 1994, she has enjoyed many opportunities to teach literature, writing, and the arts. She was the Overall Winner in the 2009 Touched by Love contest for unpublished authors. Her debut novel, Dance of the Dandelion with Whitefire Publishing, won an honorable mention in the 2012 Selah Awards. Her latest novel, Love in Three-Quarter Time, is the launch title for the new Zondervan First imprint. Dina is a contributing author at Inkwell Inspirations, Colonial Quills, iflourishonline.com, a part-time acquistions editor for WhiteFire Publishing, and she is represented by Tamela Hancock Murray of The Steve Laube Agency. Join her as she discovers the unforced rhythms of grace. For more info visit her at http://dinasleiman.com/