I’ve been snooping around my old stomping grounds up along the shore of Lake Ontario. That’s one of the Great Lakes ( I think that deserves capital letters…).  I don’t know how great it is but it is big. In toddler terms it’s THE BIG LAKE because we have quite a few in upstate NY but this is the only one where you can’t see to the other side! (Canada, by the way, if you’re wondering)


I never really took local history for granted – it always interested me. This is old frontier land – French and Indian war sites, Iroquois Confederacy land, War of 1812 incidents and a hot-bed of abolitionist sentiments later on. We have the Erie Canal, too.


Two things I  did take for granted – the abundance of green and blue as in lots of agriculture and, most especially along the lake, orchards; the other was cobblestone houses.

Along the ancient lake bed is an east-west highway once no more than an Indian trail. We call it Ridge Road for hundreds of miles. In an area of New York state, mostly within ninety miles east and west of the city of Rochester are the majority of buildings known as Cobblestone buildings found across the northeast/great lakes basin. 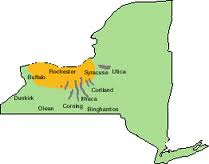 If you are thinking of cobbles –the uneven stones or brick like stones used to make streets in many old towns and cities, here and abroad, you are only close.  Cobbles in my neck of the woods are smooth round rocks that fit nicely in your hand. Big, heavy and smooth and come in a variety of colors of grays, tans and the occasion brownish red.


Cobblestones are unique in this area as they are the remnants of glacier activity. The same kind of round rocks we still see along Lake Ontario’s shore are often found far ‘inland’ because they weren’t caused by the action of water but by the movement of our visiting glacier.

Stone masons came to love these stones for buildings and created hundreds of them (an estimated 1200 across upstate New York). These cobbles were free, of course, for the picking. And anyone who has gardened, cleared land and garden for agriculture knows that rock-picking is part of the progress. Clever and impressive use of these stones made building with cobblestone a type of folk art throughout part of the 19th century.

While researching a very unique village along the lake shore for some history posts and a possible fiction series in the future, I settled on this post about cobblestones because I was struck again by the loveliness of these homes and what a treasure they are in the county I grew up in.


A ‘Cobblestone Trail’ exists for tourists as well as a museum dedicated to these lovely homes. For more: See a link to the Cobblestone Museum


Stone houses are not unique to upstate NY but this style of using cobbles is a bit different than houses found elsewhere. Many local artisans moved on west along the Great Lakes and created cobblestone houses along the way.
Have you anything similar where you live?