Riding on a Christmas Wish by Anita Mae Draper

Anita Mae Draper's "Riding on a Christmas Wish" is set in December of 1911 in York County, Ontario, Canada, and it is clearly a time of transition.  At Christmastime, the roads suffer from the winter weather, and Thomas Coventry can't imagine why anyone would want to ride a bicycle on them.  But, much to his dismay, his daughter, Sadie, has her heart set on getting a two-wheeler for Christmas.  His wife, Eliza, thinks it's a fine idea for their growing-up girl to have some independence, but Thomas absolutely will not allow it.  A bicycle on winter roads with those irresponsible motor car drivers everywhere?  Haven't he and Eliza lost enough already? 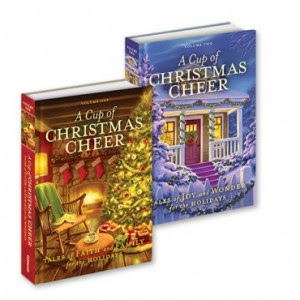 I really enjoyed this story from the two-volume A Cup of Christmas Cheer collection from Guideposts.  Things were different in 1911.  Cars were still more the exception than the rule.  Bicycles had been around for nearly a hundred years by then, but the horse was still a much more usual mode of transportation, especially in the country.  I loved the old-fashioned feel of this story with it's sleighs and telephones with party lines.  I especially enjoyed the Canadian setting with its differences from and similarities to the American midwest.
Thomas is very much a traditionalist, at times stubbornly resistant to change and overprotective due to past losses, but he's a tender husband and father.  He and Eliza are a loving couple who are comfortable with each other yet still have that spark of romance to remind them of their courting days, a couple you can't help liking and caring about.  Eliza herself is a woman with a realistic mix of wanting to be a good and supportive wife while at the same time wanting her daughter to have the freedom she desires and wanting her husband to see things in a different way than he usually has.  Their story is a charming glimpse into turn-of-the-century life along with a timeless tale about letting go and trusting God with what we love most.

Well done, Anita!  Looking forward to more from you.

Have you read any stories set in Canada?  The one that comes to mind for me is Mrs. Mike.  I really enjoyed that one, though it's been decades since I've read it.

DeAnna Julie Dodson has always been an avid reader and a lover of storytelling, whether on the page, the screen or the stage. This, along with her keen interest in history and her Christian faith, shows in her tales of love, forgiveness and triumph over adversity. She is the author of In Honor Bound, By Love Redeemed and To Grace Surrendered, a trilogy of medieval romances, as well as Letters in the Attic, The Key in the Attic, The Diary in the Attic and The Legacy in the Attic, contemporary mysteries. Her new series of Drew Farthering Mysteries debuted in the Summer of 2013 with  Rules of Murder,  to be followed by Death by the Book and Murder at the Mikado in 2014 from Bethany House.  A fifth-generation Texan, she makes her home north of Dallas with three spoiled cats.
Posted by DeAnna Julie Dodson at November 05, 2013