Ten years ago several factors came together and in a serendipitous moment created the phenomena in my family known simply as “Girls Weekend.” For one thing, my Grandmother Betty had passed away not long before, and my mom and her sisters realized that with their own growing families they would have to create some new traditions to maintain their own relationships and keep their mother's memory alive. Second, my cousin Rachel canceled her wedding. Third, my mother had recently moved to Virginia Beach, which meant the three sisters were more spread out from their origins near Pittsburgh than ever before.
So all the women in the family decided to descend on Virginia Beach during the first weekend of December for a fun “Girls Weekend” to help Rachel through the day that should have been her wedding. It was such a hit, that it became a yearly tradition.
Here are some key factors in Girls Weekend:

1) Drive through a Christmas light display
2) Shopping and lunch in festively decorated Williamsburg
3) A Shang-hi (a.k.a. the craziest, most complicated card game ever created) tournament...in Christmas pajamas
4) Elaborate award ceremony for both winner and “looser”
5) "Looser" must dress in embarrassing Betty inspired attire and dance with an umbrella in the street (something Betty was known to do)
6) Attending the Storyland Christmas Ballet, always featuring at least one of Dina's children
7) Christmas gift exchange complete with the reading of “'Twas the Night Before Christmas”
8) Presentation of the yearly “Betty” award to the person who did the most Betty-like (a.k.a air heady and/or O.C.D.) thing during the year
But there's always room for new traditions too. Last year we tried a spa night at my sister's house, and while we waited for our turns, we made a Christmas craft. This year, the craft survived the tradition cut, but the facials did not. Instead, we watched the live Sound of Music with Carrie Underwood. This year was also different because my daughter Christi was away at college and my ten-year-old niece Ella officially took her place (she was an apprentice last year.)

Girls Weekend is one of the highlights of my year. Since I live in town, and my normal life continues, I don't always get to participate in everything. But nothing could stop me from making shang-hi or the gift exchange. And for the first ever this year, I won the Betty award!!! I was a real underdog. Everyone had said for years that I have the least Betty traits of the whole family, and that I'm more like my fraternal grandmother, Helen. But this year I protested based on the fact that often sing and occasionally even dance through grocery stores. It at least got my name in the hat, and I ended up winning.


This is the only time every year that I get to watch my normally serious mother carry on with her sisters and giggle until she cries. That alone makes it all worth while. Traditions come and go, but relationships and family last forever, which is really what Girls Weekend is all about.

Oh, and in case you were wondering, Rachel got married a year later...to the same guy :) And here is another thing Grandma Betty was famous for, her awesome pizzelle Christmas cookies. 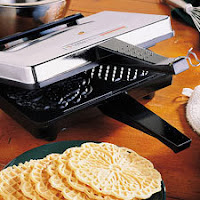 Mix and cook in greased Pizzelle maker until golden brown. Allow to cool and turn crispy. Store dry in a tin or tin foil.

Dina Sleiman writes lyrical stories that dance with light. Most of the time you will find this Virginia Beach resident reading, biking, dancing, or hanging out with her husband and three children, preferably at the oceanfront. Check out her novels Dance from Deep Within, Dance of the Dandelion, and Love in Three-Quarter time. And please join her as she discovers the unforced rhythms of grace. For more info visit her at http://dinasleiman.com/