Hi friends. I had planned to use my February post to share a little about my upcoming Valiant Hearts Series, but I didn't realize it would fall so close to Valentine's Day. So I decided to share about a romantic element of the series, which is releasing soon. Enjoy and Happy Valentines Day!

While writing my YA medieval/adventure romance novels, I faced a bit of a moral conundrum. Should I include kissing in books geared toward Christian teens? I don’t think that kissing should be done recreationally or taken lightly. Therefore, in today’s culture, I wouldn’t necessarily recommend that sixteen and seventeen-year-olds jump on the kissing bandwagon, and I certainly wouldn’t want younger teenage readers to think that I’m encouraging them to experiment with kissing.

On the other hand, I’m not sure that the “purity” and “courtship” fanatics have gotten this issue right either. Song of Solomon recommends that young women not “awake love before it pleases.” This is smart. Before a young innocent woman becomes awakened sexually, it is pretty easy to stay pure. Once that awakening process has begun, usually through kisses and embraces, it becomes more challenging to maintain godly morals.

However, I don’t think the honeymoon night is the right time to BEGIN that awakening process either. For one thing, it’s just too late and too much pressure on a bride. In addition, I think that before you make a permanent decision like marriage (among other more important issues) you should at least take into consideration the level of physical attraction. While it is wise to base a relationship on a strong friendship, there also needs to be that reasonable spark of attraction or else marital intimacy could be very awkward. If there is no physical contact (i.e. kissing), that can be hard to assess. So I would say that once you start seriously dating with an eye towards marriage, perhaps in your late teens or early twenties, and once the friendship is on solid ground, kissing is fine. (Okay, let's fact it, kissing is great!)

Which brings me back to my medieval series. The medieval culture was different from our culture today. Girls typically married during their teen years, and my heroines are clearly headed in that direction. So my final decision was that they needed to experience some kisses with their potential mates, and that it would be appropriate to include a bit of kissing in my books.

Besides, everyone loves a good kiss!

P.S. For a good balanced perspective on the concerns surrounding kissing, check out this article. I especially like the way they continually encourage you to seek guidance from the Holy Spirit.

What are your views on kissing? Have you been exposed to any of the anti-kissing or courtship hype? How did you feel about it?
~~~~~~~~~~~~~~~~~~~~~~~~~~~~
Dauntless by Dina Sleiman
Officially releases March 3
Print Version Available on Amazon Now!


Where Legend and History Collide,
One Young Woman Will Fight for the Innocent 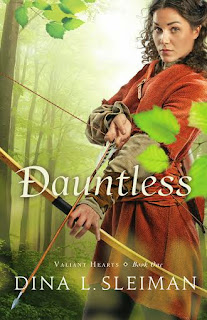 Born a baron's daughter, Lady Merry Ellison is now an enemy of the throne after her father's failed assassination attempt upon the king. Bold and uniquely skilled, she is willing to go to any lengths to protect the orphaned children of her former village--a group that becomes known as "The Ghosts of Farthingale Forest." Merry finds her charge more difficult as their growing notoriety brings increasing trouble their way.Timothy Grey, ninth child of the Baron of Greyham, longs to perform some feat so legendary that he will rise from obscurity and earn a title of his own. When the Ghosts of Farthingale Forest are spotted in Wyndeshire, where he serves as assistant to the local earl, he might have found his chance. But when he comes face-to-face with the leader of the thieves, he's forced to reexamine everything he's known.
Read a sample of Dauntless
Pre-order at Christianbook
Pre-order at Amazon