A NAME UNKNOWN and A SONG UNHEARD by Roseanna M. White, Reviewed by Winnie Thomas

Having read some of Roseanna M. White’s previous novels, I knew I was in for a treat with A Name Unknown. The cover is absolutely beautiful, and the premise was so fascinating. I loved the setting in Cornwall and London directly before the beginning of WWI. White’s descriptions and attention to detail are superb, showing obvious extensive research.

The main characters, a stuttering novelist named Peter Holstein, and a talented thief named Rosemary Gresham, seem unlikely associates, but they are so vividly drawn and endearing that I was totally captivated by them and their story. The messages of redemption, forgiveness, and faith woven throughout the book added further dimension to it. 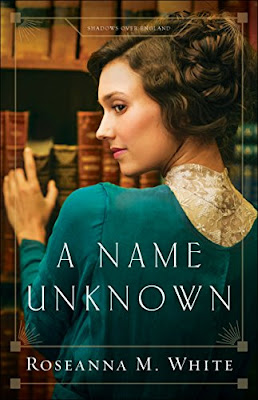 Roseanna M. White’s talent for crafting a unique, memorable story makes her a favorite author of mine. I would recommend this book to those who enjoy clean, historical romantic fiction.

BACK COVER BLURB:
Rosemary Gresham has no family beyond the band of former urchins that helped her survive as a girl in the mean streets of London. Grown now, they concentrate on stealing high-value items and have learned how to blend into upper-class society. But when Rosemary must determine whether a certain wealthy gentleman is loyal to Britain or to Germany, she is in for the challenge of a lifetime. How does one steal a family's history, their very name?

Peter Holstein, given his family's German blood, writes his popular series of adventure novels under a pen name. With European politics boiling and his own neighbors suspicious of him, Peter debates whether it might be best to change his name for good. When Rosemary shows up at his door pretending to be a historian and offering to help him trace his family history, his question might be answered.

But as the two work together and Rosemary sees his gracious reaction to his neighbors' scornful attacks, she wonders if her assignment is going down the wrong path. Is it too late to help him prove that he's more than his name?

*I voluntarily reviewed a complimentary copy of this book from the author/publisher with no obligation to review or post a positive review. All opinions are my own.

I absolutely adored the first book in this series, A Name Unknown, so I was anxiously awaiting the release of A Song Unheard. I definitely was not disappointed. The gorgeous cover and the description of the book completely captivated me. Roseanna M. White has an amazing talent for infusing her books with authentic historical details while spinning a delightfully fascinating fictional tale. Her expertise in creating memorable, engaging characters and placing them in unique settings and situations has put her books on my “must-read” list. 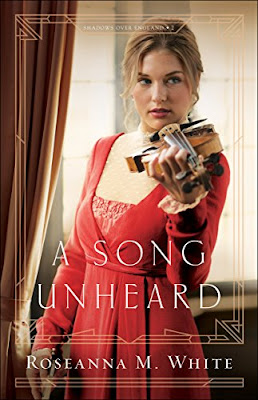 Willa and Lukas, the main characters in this book, intrigued me from the start, and the complex plot made it difficult for me to put the book down until the final page. The secondary characters were also expertly drawn. With intrigue, suspense, romance, music, and a healthy dose of humor, this story makes for a deeply absorbing read. I enjoyed the threads of redemption, faith, and grace seamlessly woven throughout the book. I would recommend this book to those who like historical fiction.

BACK COVER BLURB:
Willa Forsythe is both a violin prodigy and top-notch thief, which makes her the perfect choice for a crucial task at the outset of World War I--to steal a cypher from a famous violinist currently in Wales.

Lukas De Wilde has enjoyed the life of fame he's won--until now, when being recognized nearly gets him killed. Everyone wants the key to his father's work as a cryptologist. And Lukas fears that his mother and sister, who have vanished in the wake of the German invasion of Belgium, will pay the price. The only light he finds is meeting the intriguing Willa Forsythe.

But danger presses in from every side, and Willa knows what Lukas doesn't--that she must betray him and find that cypher, or her own family will pay the price as surely as his has.


I voluntarily reviewed a complimentary copy from the publisher. All opinions are my own.
Posted by Debra E. Marvin at April 14, 2018