SEVEN BRIDES FOR SEVEN TEXANS (and Texas Rangers too!), Review by Rebecca Maney

Meet the seven Hart brothers of the 7-Heart ranch in central Texas. Each man is content in his independent life, without the responsibilities of a wife and children—until their father decides 1874 will be the year his grown sons finally marry, or they will be cut from his will. How will each man who values his freedom respond to the ultimatum? Can love develop on a timeline, or will it be sacrificed for the sake of an inheritance? 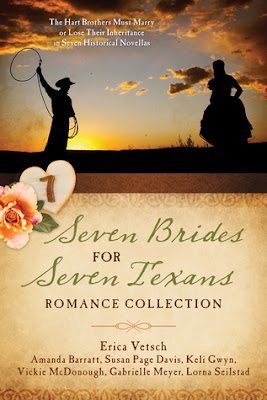 "Outstanding" is an adjective that would accurately describe this endearing collection of Texas romances. Each and every story was well plotted, capitalized on extraordinary characterizations, and blended seamlessly among its counterparts, reading as if written by one author, rather than seven.

If I had to choose a favorite(and I would rather not), it would be Bowie and Elise; their rediscovery of each other, their sweet realization of true love, and their deep struggle to express it, was both heart breaking and heart warming. What a wonderful set of stories!


The Ranger's Reward by Gabrielle Meyer
Texas Ranger, Griffin Sommer stops to check on the young widow, Evelyn Prentis minutes before the Markham gang arrives at her farm needing a place to hide. Griff and Evelyn are forced to pretend they’re married to keep Griff’s identity a secret, but will Evelyn’s young son let the truth out before Griff can bring the gang to justice?

More Precious than Rubies by Lorna Seilstad
Fun-loving, charismatic Texas Ranger Whit Murray is restless for an adventure. When bandits attack the train he is on and steal jewels Violet Tatienne is transporting home to her father’s jewelry store, the two of them must work together to find the thieves. Will each one’s individual goals keep them from discovering the real treasure is in each other?

Jesse’s Sparrow by Amanda Barratt
Former soiled dove, Sara Byrne longs for escape. . .and rides straight into danger. Ranger Jesse Rawlings wants only to defend and protect.  . .no love involved. But when Sara’s stagecoach is robbed and her possessions stolen, can she find the strength to aid a man she deems anything but trustworthy in bringing justice to the perpetrators?

The Countess and the Cowboy by Kathleen Y’Barbo
Ava Becker is furious that her brother sold her favorite stallion to the irritating Texas Ranger Ezra Creed. When the horse goes missing, Ezra blames Ava, who sets out to find the horse, landing in an outlaw’s camp instead. Can Ezra protect the persistent Ava without falling in love, or will love make for a dangerous chase?

Simple Interest by Susan Page Davis
While making his monthly deposit, Ranger O’Neal Brewster is forced to watch robbers escape with the prim and pretty bank teller as their hostage. Augusta Ferris quickly makes the outlaws regret kidnapping her, but she is determined to get back the bank’s money—whether the Ranger helps her or not.

Partners in Crime by Vickie McDonough
Micah McCullough, a Texas Ranger working undercover in the Markham gang, is tasked with guarding Laurel Underwood, a silversmith, who was kidnapped to create plates for printing counterfeit money. Laurel knows she doesn’t have the expertise. Her only option is to stall and seek escape. What will the outlaws do when they learn her secret?

Guard Your Heart by Erica Vetsch
When Constance Spanner witnesses a murder, Branch Kilborn is tasked with protecting her until she can testify against Cass Markham. This is the Ranger squad’s chance to abolish the Markham gang once and for all, but Branch soon finds that protecting Constance has become about more than just the job

DO YOU NEED MORE TEXANS? 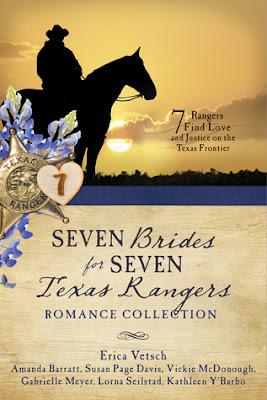 Return to Hartville, Texas where you will enjoy reading this delightful collection of stories regaling the merits of romance, especially when attraction of the feminine nature manages to arrest some of the toughest men on the face of the earth; Texas Rangers. Ranging from a young widow to a silversmith, from a hat maker to a countess; a former soiled dove, a jeweler and a bank teller; they each successfully prove that under every silver badge beats a heart just waiting to be captured by love.