THE SEA BEFORE US by Sarah Sundin, reviewed by Karen Klepsteen

This newest series by Sarah Sundin is probably the heaviest one she's written so far, and I mean that in an entirely good way! The Sea Before Us has a prologue that explains the reason for the Paxton brothers' estrangement. While Sarah's not afraid to tackle serious subjects, it's such a serious way to start the story, but it's important. Because of this, we get to see Wyatt Paxton's growth over the years as he joins the U.S. Navy and tries to do his part to mend the rift in his family.
When introduced in the story, Dorothy Fairfax has also come a long way in her young life. Having survived the London Blitz but not without tragedy, Dorothy and her father are trying to survive, each in their own ways. As Dorothy and Wyatt come to know one another and grow closer together, it's both sweet and frustrating to see how they learn to let go, forgive, heal, and accept God's plan for their lives. Set against the backdrop of England in the days leading up to D-Day, the story is set up beautifully in its themes of forgiveness and timing. 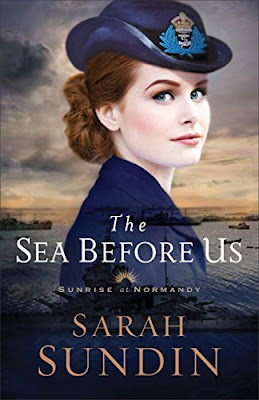 There are some interesting plot twists that kept me on my toes, and I'm anxious to see how the Paxton family grows throughout the Sunrise at Normandy series!

BACK COVER BLURB:
In 1944, American naval officer Lt. Wyatt Paxton arrives in London to prepare for the Allied invasion of France. He works closely with Dorothy Fairfax, a ÒWrenÓ in the Women's Royal Naval Service. Dorothy pieces together reconnaissance photographs with thousands of holiday snapshots of France--including those of her own family's summer home--in order to create accurate maps of Normandy. Maps that Wyatt will turn into naval bombardment plans.

As the two spend concentrated time together in the pressure cooker of war, their deepening friendship threatens to turn to love. Dorothy must resist its pull. Her bereaved father depends on her, and her heart already belongs to another man. Wyatt too has much to lose. The closer he gets to Dorothy, the more he fears his efforts to win the war will destroy everything she has ever loved.

The tense days leading up to the monumental D-Day landing blaze to life under Sarah Sundin's practiced pen with this powerful new series.