Freedom and "The Greatest Generation" 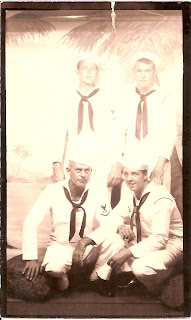 They're called "The Greatest Generation." The men and women who lived and worked and served and sacrificed and died during World War II all pulled together in a phenomenal effort to keep the idea of freedom alive in the shadow of the Axis threat. But who were they?
Most of these heroes, and I don't use the term lightly, were just everyday people who did their part, not because it was easy or because it would bring them riches or notoriety, but because it was simply the right thing to do.

One of these heroes is my dad, Julian Ray Dodson (standing, right). He enlisted in the U. S. Navy in February of 1943 at the age of seventeen. Before then, he'd never traveled alone away from his home in Dallas, Texas. By the time of his honorable discharge in December of 1945, he was a Gunner's Mate 2nd Class. He'd been all over the Pacific Ocean and the United States and even some of the Atlantic – as far west as Leyte Island and as far east as Guantanamo Bay in Cuba, as far north as Farragut, Idaho, and as far south as the New Hebrides. By then, he was twenty years old.

During that span of almost three years, he got to go home three times: for 10 days after he finished boot camp, for 36 days after he had been in the service for two years, and for 10 more days right before he was discharged. That's less than two months at home for nearly three years, and he wasn't even old enough to vote. Letters took three or four days to get to him when he was at boot camp in Idaho. When he was overseas, they took three to five weeks. It must have been easy to feel lonely and homesick, but like all the other men, he did his job without complaint.

Okay, maybe a little complaint. I know during his time overseas he must have been bored and hot and constantly on edge, uncertain about what the enemy might do, but he usually passes over that when he talks about the war. Most of the time, the only thing Dad complains about is the food – the reconstituted powdered eggs, the dehydrated vegetables and the Spam. He still can't look at Spam without a shudder, but at the time it was just about the only way to provide meat to the sailors on ships without refrigeration. Most of them didn't have much refrigeration. Most of them, including the LST 118 he served on, did have Spam. 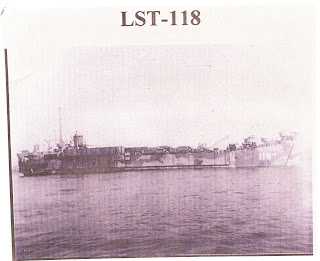 But, Spam and all, he and the men and women like him did their jobs. Democracy survived and flourished because of them. I don't think we realize today what it was like then. We've been at war for several years now, but we hardly feel it here at home. Back then, they knew they were at war, whether they were on the battlefield or on the home front. There was rationing and shortages and real sacrifice. People gave of their property and time and talents to make the war effort successful, and we have much to thank them for.

They're not called the "The Greatest Generation" for nothing.

Do you know people from "The Greatest Generation"? Have you ever listened to them talk about their WWII experiences? How can we support those serving in the military now?