by Susanne Dietze
I've got an affection for historical costume, and my love affair with all things relating to the Regency period in England (roughly 1810-1820) includes an appreciation for its signature clothing style -- cravats and waistcoats for the gentlemen, and empire waists, Greco-Roman columns, and light muslins for the ladies.

When the Los Angeles County Museum of Art (LACMA) offered a temporary exhibit, "Fashioning Fashion: European Dress in Detail, 1700-1915," I was blessed to attend with my family in tow. Non-flash photos were allowed, so I took a few pictures, and I wanted to share a few Regency-specific ensembles with you.

The photo below shows gowns from two different eras: the stunner on the left is early-Victorian, and IMHO quite lovely. Nevertheless, I was a bit more interested in the Regency-era ensemble on the right. (My daughter proudly pegged the brown jacket as Regency-appropriate and even called it by name -- a spencer! Some kids pick up sports trivia from their parents...mine absorb Regency clothing names. I'm so sorry, kids.) 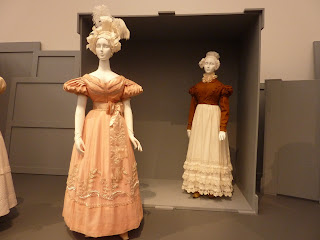 Doesn't it look like the Regency-clad mannequin is looking wistfully at the Victorian gal's gorgeous gown? A bit like Cinderella before the Fairy Godmother arrives...Sigh. I've been there, honey.

Around the corner, I discovered some gentleman's court (read: fancy) ensembles that were a bit too early to be categorized as Regency, but they came close. The craftsmanship that went into these pieces amazed me. Alas, my photo of the black one did not turn out. My photo of the second suit, however, came out fairly well. Despite its militaristic look from the red wool coat, it's dashing enough for someone of Pride and Prejudice's Mr. Darcy's vast wealth to have worn (although I always picture him in a bottle green coat. But I digress.) 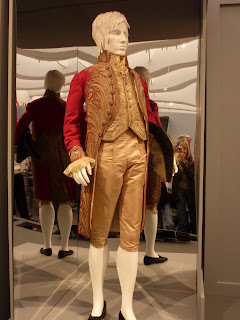 The red coat and cloth-of-silver waistcoat are both heavily embroidered with silver thread, weighing in at more than six pounds!

And what would Mr. Darcy's lady, Elizabeth Bennet, be wearing, perchance? Well, the ladies' formal gowns on display were all a good twenty or so years younger than the gentleman's ensembles, so we'll have to use our imaginations. But here's a lovely late-Regency gown that Elizabeth Darcy could have worn years after Pride and Prejudice concluded. This stunner from 1818 is deceptively simple. It's fashioned of lace, as you can best see by examining the hem. It was worn one year after Jane Austen's death. 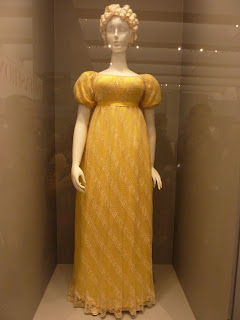 ﻿
The next two photos show a silk court gown from 1825. It doesn't qualify as Regency because it's too late and it's not English (it's Portuguese), but I thought it was too beautiful not to share. It's embroidered with golden palm fronds and exotic flowers. Indian muslins, turbans, and exotic plants were popular during this period. 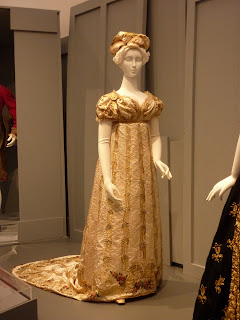 Here's a close-up of the train: 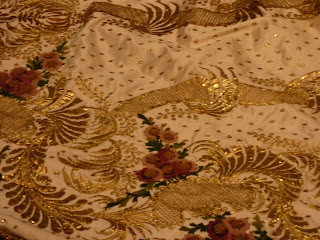 Wowee. I wonder how long it took a team of embroiderers to do that. It's gorgeous.

Last but not least, here's a photo of a beaded Regency-era reticule -- a small purse. This was the one item on display which surprised me and set me on a new wave of research. In my own stories, I've always had my heroines carry things in their reticules like handkerchiefs and coins, and perhaps even a letter. Big mistake? I wonder, because this one is barely three inches wide. The reticules displayed at the LACMA grew larger as the decades progressed, but this Regency-era representative seems more like a coin purse (and it's half the size of the tobacco pouch to its left). 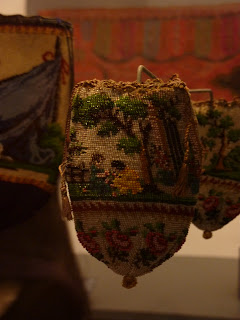 The embroidery on this reticule is fine indeed. But is this tiny-sized purse a fair representative of all Regency-era reticules? As with everything on display at the museum, from stockings to gowns, I would have loved to have had some context to go with it (who owned it? Where did they wear it?). Not knowing the answers has given me some work to do.

And it's inspired me to make up my own stories to answer those questions.


Do you enjoy historical fashions? And more pressing, are you an expert on reticules? HELP! :-)

A version of this post originally appeared on Tea and a Good Book, www.susannedietze.blogspot.com.

Susanne Dietze has written love stories set in the nineteenth century since she was in high school, casting her friends in the starring roles. Today, she writes in the hope that her historical romances will encourage and entertain others to the glory of God. Married to a pastor and the mom of two, Susanne loves fancy-schmancy tea parties, travel, and spending time with family and friends. Her work has finaled in the Genesis Contest, the Gotcha! Contest, and the Touched By Love Contest. You can visit her on her personal blog, Tea and a Good Book, http://www.susannedietze.blogspot.com/.
Posted by Susanne Dietze at January 10, 2012