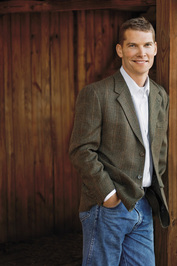 If you're a bookworm like me, probably one of the world's purest joys is the discovery of a fabulous new author. So today, I would like to introduce you to Charles Martin. Honestly, I have no idea why I had never heard of him. He wrote for Thomas Nelson for years. Now he's crossed over to ABA publishing and hit the bestseller list. Plus his books are incredibly romantic. Think the Christian Nicholas Sparks. Oh, and in case you happen to be sight impaired, let me mention that he's a total cutie.

My good friend and writing buddy, Angela Andrews, had been bugging me to check out Martin for a few months. Turns out he went to the same grad school we did, Regent University. And Angela had totally fallen in love with his writing. But with my never ending to-be-read stack, I didn't get to him until she actually broke down and bought me a book. Now that's a true friend.

When Crickets Cry was published in 2007, so I'm a little late with my review. Short story is, I loved it. It's a novel of healing, hope, and romance. Martin's writing is very artistic. A sort of literary feast where you can savor each word. This book is all about the heart: from the characters who will capture your heart, to their own wounded hearts, to the actual human heart in all its splendor. And all of this ties beautifully to the spiritual heart with a deft touch that will change you without ever falling into preaching. 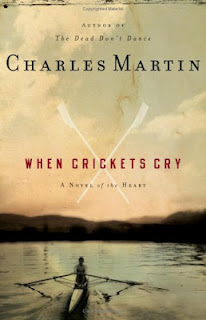 Now's the time I'm supposed to say I enjoyed every moment of reading this book. But actually, that wouldn't be true. There were chapters that were a little slow and descriptive, even for artsy me. But don't give up on this book, because it's well-worth persevering. Then there's a moment at the end that I felt was tricky. A sort of "ha ha, you actually believed me" kind of moment. I hate jokes like that. Anyway, I was pretty upset for a few pages and ready to throw the book at the wall. For a short time I felt like the author had completely ruined all his hard work with an awful ending. Fortunately, I was wrong. Everything turned out great. I'm sure there's some spiritual lesson in there somewhere. Probably I should have seen all the clues, including several prophetic moments, and clung to my faith in spite of how circumstances appeared. LOL. And the fact that the story provoked such a strong response in me just goes to show how invested I became in it.

Overall this book was tremendous. And I'm so glad to have found this new author. If you like books that tug at your heart, you need to check out Charles Martin. His writing really is exceptional.

Dina Sleiman writes lyrical stories that dance with light. Most of the time you will find this Virginia Beach resident reading, biking, dancing, or hanging out with her husband and three children, preferably at the oceanfront. Since finishing her Professional Writing MA in 1994, she has enjoyed many opportunities to teach literature, writing, and the arts. She was the Overall Winner in the 2009 Touched by Love contest for unpublished authors. Her first novel, Dance of the Dandelion with Whitefire Publishing has just released. She has recently become an acquisitions editor for WhiteFire as well. Join her as she discovers the unforced rhythms of grace. For more info visit her at http://dinasleiman.com/
Posted by Dina Sleiman at May 19, 2012