Today is the final installment of our serial story, A Month Of Expectation. You can find the beginning here.

The storybook framework of Emma's carefully constructed future crumbled like a tired Vegas casino in the hands of a demolition crew. She turned away, sickened by the image of her beloved sister and fiance in a romantic--and obviously familiar--embrace.


Her mother's foreboding words rumbled through Emma's soul like thunder. You need to expect that things may not go quite as you planned.

Emma grasped the banister with one hand and began to make her way down the fifteen flights of stairs. Why hadn't one of them said something to her? Had they played her for a fool all along?


The hollow, empty ring of her footsteps on the concrete stairs echoed in her heart and chased her home to a tormenting refrain: What you sow, you shall also reap. If anyone deserved to reap the bitter flavor of betrayal it was Emma, and she knew it.
* * *
She closed her eyes when her head touched the pillow only to have them snap open and stare into the darkness. Reason and logic warred with conscience and conviction. Reason said, “stay the course.” What did it matter that Thad and Jenny had once been involved with each other? No one ever had to know she'd seen Jenny and Thad together. She and Thad could get married just as she'd spent all these months carefully planning. Thad was right for her, and she was right for him. Their families approved of the marriage. Every detail was in place, from the seed pearls on her gown to the virginal white satin peignoir set wrapped in tissue and packed in her bridal luggage set.


Emma took a deep breath and released it. Then, for the umpteenth time, she waited for the inner peace that should follow the right decision. But peace wouldn't come. She balled her fists into the eiderdown comforter in frustration.

Emma had dreamed of her storybook wedding for years, just waiting to paint the groom's face into her mental picture. The innumerable preparations she'd made were more real to her than the marriage that would follow the vows. In her mind's eye, everything she'd planned was perfect.

But Emma couldn't ignore the pesky irritation coming from her conscience and the soft nudging she'd come to recognize as the conviction of the Holy Spirit. In her brief experience with God, she knew His plans outweighed anything she could arrange for herself, but was she willing to let go of the dreamy vision she'd created for her wedding day -- and for her life?
* * *
The alarm bleeped just as the first beams of sunlight pierced the window. Emma turned her face into the light. Had she slept at all?

“Lord, grant me the strength I need to do what's right in Your sight,” she murmured. “I've tried to create my own plan, instead of trusting Your plans for me, Lord. Forgive me, and help me to trust that You alone know what is best for me.” Even as she whispered the final words, a gentle warmth poured through her soul like melted chocolate, providing sweetness and light for the difficult day ahead.

She threw on jeans and a T-shirt instead of the white velour “bride-to-be” jogging suit she'd laid out, snatched up her car keys, and headed out the door.

Although the day was warm, she kept the top on the convertible up. The part of town she'd be visiting wasn't the kind of place you left your doors unlocked or your car parked by the curb. But today she didn't have much choice.

She shoehorned the car into a space in front of a rambling brick warehouse. The kind people remodel into multi-million dollar lofts--except this one was in its original state of disrepair. With her lips set in a determined line, Emma stepped around a pile of dog excrement and marched to the door. She pushed the buzzer and planted her feet, lest she lose her nerve. The toe of her sneaker rapped the concrete with nervous impatience. What if he wasn't here?

Just when she was ready to whirl and run, the heavy steel door jerked open. The melted chocolate feeling she'd experienced earlier rushed back with the force of a flash flood so intense it weakened her knees. Remy.

Dark hair curled past his tanned face and fell in waves past his shoulders, creating a stark contrast to the wrinkled white T-shirt that clung to his lean form. Bare feet stuck out below the ragged hems of worn blue jeans. His eyes, gray like a dove's wing, widened. He opened his mouth, but Emma held a finger to his lips. If he said anything at all, she'd lose her nerve.

He blinked, but held her gaze as he grasped her fingers and pressed a gentle kiss on the sensitive inside of her wrist.

Emma snatched her hand away and shoved it in her back pocket. 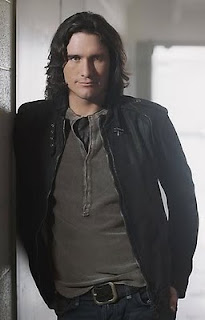 “I thought I just did,” he replied.

His voice resonated all the way to the marrow of her bones and shot an involuntary shudder down her spine.

“Do you still love me, Remy? Would you still marry me?”

He grinned. A sensuous, sultry smile better suited to a rogue in a royal court than to a minister of the gospel. “Are you proposing, my darling Emma? I was under the impression you had a groom already lined up.”

The bitterness was only evident in his eyes for a flash. He scrubbed a hand against his unshaven cheek and she wondered at the rough, red places on his knuckles.

“I can't marry Thad.” There, she'd said it. He cocked his head toward her.

“And why not? If I remember your father's words correctly, Thad is the 'ideal' choice for your future plans.”

“That's the problem, Remy, it was always about my plans, not God's plans.”

An expression of sheer delight washed over his face. Emma thought he might start to glow.

“Yes, Remy. And I have to follow Him, trust that the desires He has put in my heart are what's right for me.”

“Is not the man God ordained for me to marry.”

Comprehension registered in his eyes. “But what about the ministry I'm called to? Feeding the homeless, rescuing the lost, it's messy, dirty work, Emma. No high-class parties, no fancy houses on the hill.”

Emma shook her head. “It doesn't matter. I can do anything, Remy, as long as it's what God has asked me to do. But if I try to do something else, I'll eventually self-destruct.”

“So you're willing to do the unexpected? Willing to risk the disapproval of your friends and family?”

Emma cringed. He'd known all along the things that had kept her from giving him what he'd wanted most--her love. “Yes.” She dropped her gaze to his bare toes. What if he'd changed his mind? She sensed his movement and opened her eyes to find him down on one knee.

She flung her arms around his neck, knocking him backward. They rolled together onto the grubby linoleum and poured years of unspent passion into a kiss that should have left burn marks. Remy pulled them to a sitting position.

“I love you, too, Remington. Always have, always will.”

“Have you told Thad?”

“No. But I think he'll be relieved. And I know, actually, just the way to tell him,” Emma smiled softly. “May I borrow your phone? I need to call my sister.”

Questions:
Do you think Emma is on the rebound?
If you were Remy would you be willing to take her back?