Today is the second installment of A Month of Expectation Serial Story. If you missed Day 1, you can find it here.

Thad wiped his palms across the double seam of his jeans. Crisp and indigo yes, but even at that Mother would not like him wearing them to the country club. A little act of rebellion. Who was he kidding? Father would look him up and down and say nothing, but the coldness would grow in his gray eyes--if Father made it home from his meeting in Atlanta. Sometimes he didn’t. Sometimes meetings went late into the evening.

Two perfect families discussing the last details of the upcoming wedding. Emma, her parents. The only one missing was her older sister. That made things just about perfect.

The noise that was her impatient voice grated his nerves more than usual. Frustration did that.

“Mother, I’ll be right there.” No, he couldn’t do it. He would not anger her tonight and after all, the club did have their rules. The dark jeans, no matter how he wore them, would never pass for dress pants. Some things were like that. Pretending did not change facts.

Thad swapped out the linen shirt and jeans for a white shirt and khaki suit. When he pulled the jacket off the hanger, two plane tickets fell off his dresser onto the shiny oak floorboards. Two tickets to paradise. Jamaica. Another of Emma’s dreams.

Emma wanted the ticket to read Mrs. Thaddeus Maxwell III, but with security now, it had to match her passport. She’d travel instead as Emma J Devereux of the Athens, Georgia Devereux. Sweet, beautiful, innocent Emma. She deserved the best he could give her. The house would have been impossible on his income. Thanks to Mr. Devereux, and the bank draft for $500,000, it was theirs. The old man had casually pushed it across the table, then put his hand up immediately to let him know he’d brook no argument.

“You’re a fine young man to refuse it Thaddeus. Just as you should. But this is my gift to you, for Emma. I won’t accept it back.”

Thad had been sick over it. Literally. After a polite exit, he’d made his way to the men’s room behind the clubhouse bar and lost his lunch of she-crab soup. 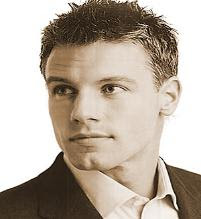 “Mother, I changed into a suit. And we won’t be late.”

Three weeks to go and already he felt trapped. He loved Emma. Heaven knows he loved her. But there was hell to be paid. It would come.

He picked up the two tickets and placed them on his dresser—on top of his bible. The irony made him laugh. Would he ever open that book again? Could he walk into church, that massive, cold, hear-a-pin-drop sanctuary and vow before God to love, honor, and cherish Emma? Look into her eyes while her sister stood alongside, knowing full well what he was hiding?

Come back tomorrow for part 3 of A Month of Expectation
So, Is Thad caught up in a situation of his own making or an innocent? I mean, look at that face...
When should secrets remain secrets? Is keeping a secret the same as telling a lie?

How do you feel about a man who would accept a financial gift like this from his future father-in-law?
Posted by Unknown at August 28, 2012