Campaigning for Your Books

As I watched the presidential campaign last year, I was struck by how much I could identify with the candidates. Oftentimes, I feel like I have to campaign for my books.

I watched their different strategies, trying to pick up some tips. Here’s what I discovered they did:

Be confident that you have what people need. If you’ve written your best book and been faithful to the call God has on your life, then be bold in spreading the word about your books. This is often hard for me. I’d much rather other people promote me. Then I realized that my books aren’t about me. My books are evidence of the calling and message God has sent me share. So now I’m trying to take more risks and trust that God has me in this place for a reason.

Go to the people… find your niche. There’s a sign by my desk that reads: Go to the mystery readers. Too often I surround myself with other writers and try to sell my books. Now, I’m looking for niche publications and websites and book clubs that like humorous mystery novels.

Surround yourself with people who believe in you. I truly believe this is important. Writing is a lonely business. We need people in our lives to hold us up and support us. When I looked at all the people who were on the campaign trail with the candidates, I realized that each of those people were needed. Some positions were paid, others were volunteers. Similarly, as authors we need people to pray for us, critique for us, help us to spread the word about our books, to hand out flyers at book signings. Sometimes, these people will be the ones you least expect.

Work like election day is coming—the election being whether or not your publisher will “vote” yes for your next book. If you don’t yet have a deadline, set one for yourself. Work hard with the goal in sight.

Accept each media opportunity. I didn’t see the candidates turning down very many media opportunities, even when the venue meant certain scrutiny. Prepare yourself to answer the tough questions that may be thrown at you by interviewers. Turn your answers into your talking points. 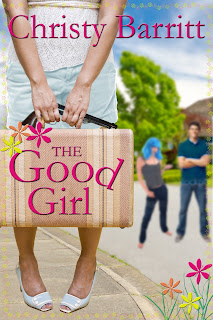 Present yourself with your best foot forward. What would you have thought if one of the candidates appeared before a crowd of people wearing sweats and with bed head? They wouldn’t make a good impression. The other day as I was getting my hair done, I told my hair stylist about some issues I was having with my curls. She said, “Girl, you’re a famous author. You can’t go around with bad hair.” And she’s right. While appearance isn’t everything, do make an effort to look professional, especially when you’re making an appearance of some sort.

I hope these tips can help you as well and that you’ll get lots of votes—um, I mean readers and editors—flocking to your books!

Many, many blessings!
Christy

PS—Aren’t you glad you don’t have to wait four years for the next opportunity to pursue your big dream?

Come back Friday when Dina will give the inside scoop on this awesome novel!

~~~~~~~~~~~~~~~~~~~
Christy Barritt is an author, freelance writer and speaker who lives in Virginia. She's married to her Prince Charming, a man who thinks she's hilarious--but only when she's not trying to be. Christy's a self-proclaimed klutz, an avid music lover who's known for spontaneously bursting into song, and a road trip aficionado. She's only won one contest in her life--and her prize was kissing a pig (okay, okay... actually she did win the Daphne du Maurier Award for Excellence in Suspense and Mystery for her book Suspicious Minds also). Her current claim to fame is showing off her mother, who looks just like former First Lady Barbara Bush.
When she's not working or spending time with her family, she enjoys singing, playing the guitar, and exploring small, unsuspecting towns where people have no idea how accident prone she is.
For more information, visit her website at: www.christybarritt.com.

What's a good girl to do when life goes bad?

Tara Lancaster can sing Amazing Grace in three harmonies, two languages, and interpret it for the hearing impaired. She can list the Bible canon backward, forward, and alphabetized. And the only time she ever missed church was at seventeen because she had pneumonia and her mom made her stay home.

But when her life shatters around her and her reputation is left in ruins, Tara decides escape is the only option. She flees halfway across the country to dog-sit, but the quiet anonymity she needs isn't waiting in her sister's house. Instead she finds a knife with a threatening message, a fame-hungry friend, a too-hunky neighbor, and evidence of...a ghost?

Following all the rules has gotten her nowhere. And nothing she learned in Sunday School can tell her where to go from there.
Posted by Dina Sleiman at April 03, 2013