THE HOBBIT: An Unexpected Journey

I don't see a lot of movies at the theater, partly because I've been pretty busy, but mostly because very few of the ads I see make me interested in the films they are advertising.  However, I knew before I ever saw an ad for it that I would want to see this film. 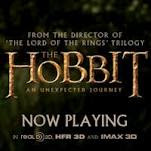 First, it's the opening movie in The Hobbit trilogy.  I am not in any way, shape or form an expert on Tolkien.  In fact, I have yet to make it through even the first book in The Lord of the Rings trilogy, though I've started it several times.  I have, however, read The Hobbit more than once and listened to it on CD.  (In that format, the songs are really, really tedious and long, but that's a separate issue.)  I was very interested to see what they would do to make this rather slim book into a three-movie epic, especially since they made only three movies for the entire much longer and much more involved Rings trilogy.
Second, I very much enjoyed the Rings movies.  They were richly and beautifully filmed, well acted and very touching.  I figured no one could do justice to The Hobbit better than director Peter Jackson.
Third, Richard Armitage. 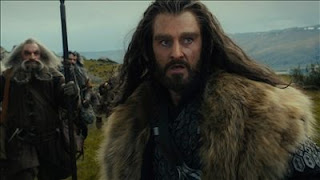 Enough said.
I wasn't sure what I would think of him with long hair and a long beard and shrunk down to dwarf size (oh, those beautiful long legs!), but he did not disappoint.  He is riveting as Thorin Oakenshield, leader of the band of dwarfs who take reluctant Hobbit Bilbo Baggins on his unexpected journey.  I have always loved Richard Armitage's voice, low and somehow intimate and always captivating, but I didn't know he could sing, too, and very beautifully. 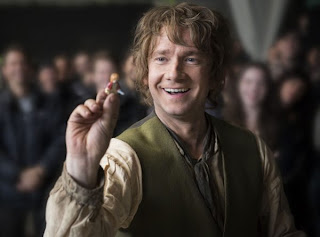 I very much enjoyed Martin Freeman as Bilbo, too.  To me, he had the right combination of reluctance and determination for the role, seeming to surprise himself as much as others with his courage and tenacity.
What didn't I like in this movie?  Mostly Radagast the Brown.  The minor wizard is mentioned only briefly in the book, though he does appear in some of Tolkien's other works.  I found his portion of the movie rather slow and, how else can I say it?, stupid.  He has a bird's nest with live birds on top of his head (cute!), and they have left their waste down the side of his face (not cute!).  As portrayed by Sylvester McCoy, Radagast seemed irritatingly foolish and far too cartoonish for my taste. 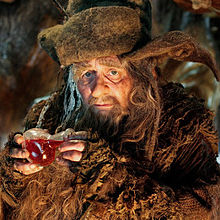 Some reviewers have mentioned that the entire film drags, but that was not my experience at all.  I was surprised when what I knew was a very long film seemed to be over so quickly.   There was adventure and humor and action and a rather amazing variety of fantastic creatures (the Goblin King was particularly horrible and well done), and it may be the most beautifully filmed movie I have ever seen.  I am certainly looking forward to more.
Overall, I thought The Hobbit:  An Unexpected Journey was great fun well done!

Have you seen The Hobbit?  What did you think of it?

DeAnna Julie Dodson has always been an avid reader and a lover of storytelling, whether on the page, the screen or the stage. This, along with her keen interest in history and her Christian faith, shows in her tales of love, forgiveness and triumph over adversity. She is the author of In Honor Bound, By Love Redeemed and To Grace Surrendered, a trilogy of medieval romances, as well as Letters in the Attic, The Key in the Attic, The Diary in the Attic and, coming up, The Legacy in the Attic, contemporary mysteries. Her new series of Drew Farthering Mysteries will debut in the Summer of 2013 with Rules of Murder from Bethany House.  A fifth-generation Texan, she makes her home north of Dallas with three spoiled cats.