My son wrote this speech for the 2013 SBC of Virginia Youth Speaker's Tournament. He did a great job -- and I'm not just saying that because I'm his mother. The judges agreed and awarded him first place. He could choose from among several topics. This is what he felt God laid on his heart.

My name is Calvin Chase, and when I signed up to give a speech, I wanted to pick an intellectual topic. I eventually decided on talking about “What God Wishes Christians Knew About Christianity.” Originally, I thought I would pick several small but important things God wished people knew and give a few examples for each, but then the Lord placed it on my heart to talk about one big thing He wants His people to know. So I would like to talk to you today about the danger posed by false teachers and how to identify them.

In Matthew 7:15, the Bible says that we should beware of false teachers. The false teachers the Bible speaks of are hard-to-notice people, who know and distort Christian terminology. It is written in Matthew 24:24 that in the last days, God will allow Satan to send a strong delusion that would even deceive the elect, if that were possible. This being the case, we have to be cautious- discerning between Biblical and unbiblical teachings.

Now we have to be careful here; Jesus himself said, “Do not judge lest you be judged.” In context, what he said is that we should never jump to conclusions. Just because someone may say something unbiblical, that may not mean he is a false teacher. That person may simply be unaware that the teaching is unbiblical. But the Bible does give us certain methods of discerning a good pastor from a bad one.

First, consider what the Bible says about the relationship between Christianity and the world. Jesus said repeatedly that people who believe and preach the truth will be hated and persecuted by unbelievers. What, then, does this imply about extremely popular pastors with massive churches and numerous bestselling books? Oftentimes, a church becomes large when its pastor decides to make it an entertainment-based organization. The gospel is not popular, so we should be wary of pastors who are.

Of course, having a big church does not make someone a false teacher. I should know because I attend a large church myself. The Bible doesn’t say we will know them by the quantity of fruit they produce, but by the quality of it (Matthew 7:15-20). Pastors who have many unbiblically minded followers are probably not preaching the true gospel. Similarly, pastors who consistently refuse to repent of an unbiblical teaching or practice are more likely to be false teachers than they are to simply not know the truth.

Another way to check if a pastor is a false teacher is to find out if they promote “signs and wonders.” The Bible says that in the last days, false prophets will perform sign miracles that will amaze many people and lead them astray (Mark 13:22). Jesus said that “a sinful and adulterous generation looks for a sign,” (Matthew 12:39) and that many would come before him on the Day of Judgment saying “did we not prophesy in your name and in your name drive out demons and in your name perform many miracles?” to which he will reply, “I never knew you.” This is not to say that God does not perform miracles- we know he does –but I hold to the teaching that God does not need to perform signs and wonders in the modern day because we have the whole Bible, and as Jesus said in Matthew 16:31, if anyone does not believe the scripture, neither will they believe even if a man should rise from the dead.

There are two more indications of false teaching that I want to mention. The second most severe trait of a false pastor is when they take Bible verses out of context or discourage people from studying the Bible. For example, a few moments ago, I mentioned the well known verse, “Do not judge lest you be judged.” The meaning of this verse is often distorted to promote religious and moral tolerance, but if one studies the Bible, it quickly becomes apparent that God is not a tolerant God and does not call his people to be tolerant. Rather God is a God of justice and mercy, and we are called to go and tell people how they can receive salvation from their sins if they repent and put their faith in Jesus’s death and resurrection.

Finally, the single greatest mark of a false teacher is when a “Christian” pastor says something contrary to the gospel. Any pastor that adds to or detracts from the basic Biblical gospel is a false teacher. The Bible states quite clearly that all have sinned and that the wages of sin is death in hell, but the one true God paid our debt so that anyone who believes in Him will live forever in paradise. There are no extra ceremonies necessary, and there are no other paths to salvation.

Now to wrap this up, I wanted to answer a question that may be on your minds right now- “This is good for identifying false teachers, but what about finding good ones?” Well, the answer is, “Read the Bible.” That sounds like a simple response, but the truth is, the best way to know if someone is teaching according to God’s Word is to go find out what God wrote. Everything a Christian needs to know about Christianity can be found in the Bible.

So what do you think? Calvin is definitely a kid with strong opinions (including some his parents may not 'agree with). Are there any aspects you disagree with? Let's discuss them! Have you observed other warning signals of a  false teacher? 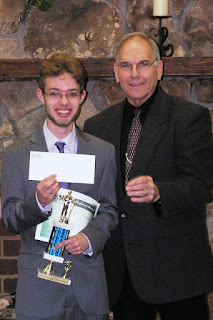 Calvin Chase plays classical violin and Irish fiddle, enjoys soccer, and writes fan fiction. He just finished his last year of homeschooling and leaves for Hampden-Sydney College in the fall where he intends to major in Chemistry and minor in Music.
Posted by C.J. Chase at May 09, 2013