Have you noticed the book widget labelled OUR BOOKS! to the immediate right of this sentence? I haven't read all the books flashing through, but one of them draws me in like eye candy. Or shall I say three of them since they are a series... 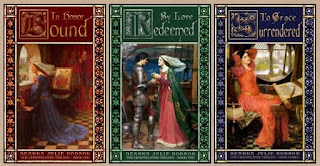 It could be the ornately detailed covers. Or it could be because I enjoy historicals in all periods. Or it could be the hint of a marriage-of-convenience story in the 1st title - admittedly one of my favorite themes. Whatever the reason, I was drawn to DeAnna Julie Dodson's medieval series, The Chastelayne Trilogy.

Admittedly I downloaded Book 1 In Honor Bound as a free download. When Book 2 in the series By Love Redeemed was offered as a free download last month I snapped it up right quick too. And I can honestly say that when I flip through my to-be-read carousel on my tablet, the rich covers of this series stand out from the rest of the ordinary book covers spinning past. 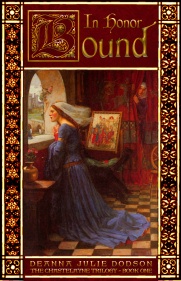 Before I go any farther, I have to say unlike the innocent-looking books on DeAnna's website book page, The Chastelayne Trilogy is not for the faint-hearted. Yes, I know she appears... passive when you look at her Fun Page but don't be mislead by her pages on cats, quilting, cross stitch and barn swallows. After all . . . cats and barn swallows on the same page? Right. And if you click on The Greatest Sport Ever link, you won't see swimming or tennis or some other non-contact sport. Oh no . . . you see Hockey - a full body-contact sport. If you check way down on her hockey page, you find this delicious quote of DeAnna's:

...he was always a delight to watch on defense - especially when putting Peter Forsberg in his place (his place, of course, being on his backside on the ice).

See what I mean. She may look like a sweet Texan who wouldn't crack a peanut, but don't let that fool you. Her skirmish and battle scenes are some of the best I've read and she doesn't hide the fact that human blood runs red. It's a wonder she can keep her vivid imagination between the covers of a book. (She does, doesn't she? I mean, what do we really know about this woman?)

I say that as a reader because In Honor Bound is a gripping tale of love won and lost in the bedroom as well as the battlefield. Tastefully and artistically written in 1997 (paperback editions displayed below), In Honor Bound is a timeless tale where events unfold in frightening detail without paying lip service to modern trends in writing. I generally don't like head-hopping but the way DeAnna writes ... coherent thoughts from different characters slip into the scene as easily as a warm spoon in ice cream. 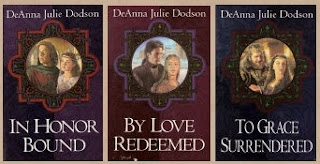 In Honor Bound leaves the bedroom door open to the most heart-wrenching scenes that left me bawling hopelessly. Sweet scenes with soft words that caressed and soothed me with tenderness. Then without warning, curt hurting words, uttered in guilt. I cried for the person receiving it as well as the person giving it because I cared so much for both of them. That's the essence of DeAnna's three-dimensional characters - they never came out of character by jarring gesture or word or deed. They became real.

DeAnna excels at portraying deep emotions that thrum with realism. Although the situations were medieval, the relationships could and do happen every single day - then and now.

Several times I highlighted lines (on my Kindle app) which seemed particularly unforgettable:

- And every moment of closeness, every embrace, every caress was purchased at the cost of his coolness towards her the next day or, worse, his absence from her altogether.

- I did what pleased me to get the crown, thinking I could get forgiveness later. Now I've gone too far to even ask.

- Tom took the piece of black bread he offered and wolfed it down, wincing as it scratched its way down his raw throat.

- I could have loved you.

Oh, that last one did me in and I wept for several minutes - not the first nor last time while reading this wonderful book.

Here's the back cover blurb:

His father will stop at nothing to keep the royal bloodline "pure" --even murder. But his sins have nearly destroyed Prince Philip and the future of his reign.
Forced into a political marriage, Philip tells his bride, "I will not lie to you, I will not be unfaithful to you, and I will not love you. My heart is pledged to another and I am not a man to break an oath."
His one true love is a lowly serving girl. When Philip refuses to set her aside in order to form a politically beneficial marriage, his father has the girl tried on false charges and executed. He then forces Philip to marry the beautiful and nobly born Lady Rosalynde. Devastated and embittered by his loss and his father's betrayal, Philip is determined to never love again . . . not his father, not his wife, not his God. Although Rosalynde adores him, he withholds his heart from her, refusing to let even death end his devotion to the love he lost. Despite his coldness towards her, Rosalynde is determined to love him and teach him to love her -- as determined as the God he has turned his back on. As civil war rages throughout the realm, Philip faces a greater struggle within himself. Will he open his heart to love again or let his pride destroy him and his kingdom?

You can find an excerpt of the Prologue and Chapter 1 on DeAnna's website. Check it out and see if it interests you.

Question: What was the last book that had you crying so much you had to set it down and find a tissue?


And you've probably seen this before at the bottom of DeAnna's posts but due to the nature of this post, I think it belongs here instead of my bio today:
DeAnna Julie Dodson has always been an avid reader and a lover of storytelling, whether on the page, the screen or the stage. This, along with her keen interest in history and her Christian faith, shows in her tales of love, forgiveness and triumph over adversity. A fifth-generation Texan, she makes her home north of Dallas with three spoiled cats and, when not writing, spends her free time quilting, cross stitching and watching NHL hockey. Her first books, In Honor Bound, By Love Redeemed andTo Grace Surrendered, are a trilogy of medieval romances and have just been redesigned and freshly edited for Kindle and Nook. She is also the author of the contemporary mysteries, Letters in the Attic and The Key in the Attic, and has recently signed on to write two more Annie's Attic Mystery: The Diary in the Attic, due out in Spring 2013, and The Legacy in the Attic, due that summer. Her newest books, written as Julianna Deering, are 1930s English cozies, The Drew Farthering Mysteries.  Rules of Murderand two sequels are due out from Bethany House starting Summer 2013. You can find out more about DeAnna and her books, including sample chapters, at her website:http://www.deannajuliedodson.com/
Note from DeAnna:  I was stupidly messing with another post and accidentally erased this one.  Fortunately, it was still "up" on another screen, so I could restore it.  Thank you, Anita, for the wonderful review.  Please forgive my idiocy.   @--}-----

No problem, DeAnna. And might I point out that your signature line proves the point of this review ... passive my eye. *snicker
Anita.
Posted by DeAnna Julie Dodson at May 17, 2013