One of the most successful and feared pirate lords of all time wasn’t a lord at all, but a lady. Ching Shih, has been known by many different names, including, Zhèng Shì; Jihng Sih, and Cheng I Sao and believe me, compared to her, Blackbeard, Bluebeard, and all the other beards were small potatoes.

Little is known about her early life, but it is believed that Ching Shih was born around 1775. We also know she spent much of her early life as a prostitute in a small brothel in Canton until she was captured by pirates. Her lifestyle changed dramatically in 1801 when she married Zheng Yi, a famous pirate captain with a pirate pedigree that went back well over a century.

By 1804 Zheng Yi, with Ching Shih at his side, managed a fantastic coup. Through cunning, force, and diplomacy he managed to form a coalition among the competing Chinese pirates. This new armada was called the Red Flag Fleet. Near the end of 1807, Zheng Yi died in Vietnam and Ching Shih demonstrated that she had learned much from her husband. With consummate cunning and foresight she moved quickly to consolidate power and preserve the fleet. In an effort to instill unity she instituted a pirate code.

The first provision of the pirate code provided that anyone giving orders that did not come from Ching Shih, or disobeying the orders of a superior, was beheaded on the spot. The second rule was that no one was to steal from the public fund (This was the big, collective pot that their loot went into) or any villagers that supplied the pirates. All booty had to be presented for group inspection. The loot was registered by a purser and then distributed by the fleet leader. The penalty for holding back treasure was death.

Ching Shih’s code also had special rules for female captives. She directed that such women should be released. But in practice the pirates made their most beautiful captives into concubines or wives. If a pirate took a wife he had to be faithful to her. Pirates that raped female captives were put to death.

Other violations of the code also carried punishments as severe as any in the Royal Navy; flogging, clapping in irons, or quartering. Deserters’ ears were chopped off, and then they were paraded around their squadron. 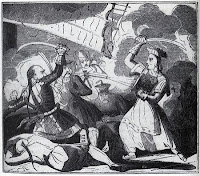 At the height of her powers it is estimated that she commanded more than 1800 ships and 80,000 pirates. This amount of muscle allowed her to direct raids of every town and ship between Macao and Canton. They grew to such strength that they actually levied taxes on some coastal towns.

She became a serious threat to some of the great imperial powers of the day, but despite concerted effort, neither the British, Portuguese, or Chinese were able to put a halt to her reign.

In 1810, Qing dynasty officials made an incredibly smart move. Rather than trying to break the pirates they offered them amnesty if they gave up their piratey ways. Ching Shih took them up on the offer, negotiating a pardon for herself and the majority of her fleet, that allowed her to retain her wealth. I did say she was cunning, didn’t I?

With her ill-gotten gain she opened a gambling house, which she operated right up to her death in 1844. Since then she has continued to color the popular imagination. Most recently, the third installment of the Pirates of the Caribbean featured a powerful female pirate lord named Mistress Ching. I think we all know where that particular inspiration came from.

Not that I admire her methods, but I do find Ching Shih’s story to be fascinating and surprising. I wonder how she managed to navigate such violent waters and come out the other side unscathed. I mean, we’re talking about a society that purposely crippled their daughters as a sign of their “high” status. Where there’s a will there’s a way, I guess. But it had to be a remarkably formidable will, and a brilliant tactician’s mind to go with it in order to both overcome prejudice and gain the allegiance of her men.

Maybe next Talk Like a Pirate Day (that’d be September 19th to the uninitiated) you’ll consider a Chinese accent in her honor?

What is your favorite surprising story of unprecedented success? 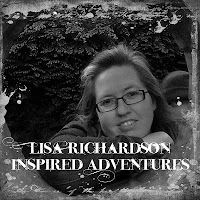