The Road Disappeared! Or Did It?

Newcomers to Colorado are often awestruck by the drive across the state on I-70. If you ARE from Colorado, it tends to become just another trip back and forth over "the hill."

We went over to Denver and back (a three-hour drive each way) on Monday to accompany our grandson to the zoo and the aquarium for his 2nd birthday. This was the first time I've gone as a passenger, with an iPhone and access to Google maps. I spent much of the drive staring at my tiny phone screen, watching our little blue blip cruise along the road. On the return trip, as we climbed the mountain toward the Eisenhower Tunnel, which takes you over the Continental Divide, I saw this... can you tell me what's wrong with this picture? 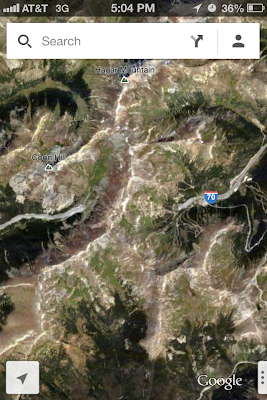 If you didn't know better (and you're the adventurous type) you might start lacing up your boots and throwing on your cape for a little "Sound of Music" hiking action.

If you're a 'fraidy cat, you might panic, shriek at the driver to stop, and insist on turning around and going back the way you came, convinced there is no way across.
However, as we were fairly confident that a large stretch of I-70 hadn't vanished overnight, we kept driving. And the road turned into the tunnel, and brought us through to the other side. There was a plan, and there was provision made for that plan.
And it reminded me of this...

It's easy to become consumed by our limited perspective and forget that we serve a God who sees all and knows all and has already prepared a path for us that will lead us to our appointed destination.


For we are His workmanship, created in Christ Jesus for good works, which God prepared beforehand that we should walk in them. Eph 2:10 NKJV

Things in this world are not always as they appear, and that's especially true when you're looking at a man-made map. What looks like a dead end may actually be a tunnel. What looks like a well-defined superhighway may turn out to be little more than a single lane four-wheel drive/cow path (we've had THAT experience, too, but I was too terrified to take pictures.)

The point is, faith doesn't require visual confirmation on some map or schedule or program.

Then Jesus told him, “Because you have seen me, you have believed; blessed are those who have not seen and yet have believed.” John 20:29 NIV

Faith IS the confirmation.


Now faith is the assurance (the confirmation, the title deed) of the things [we] hope for, being the proof of things [we] do not see and the conviction of their reality [faith perceiving as real fact what is not revealed to the senses]. Hebrews 11:1 Amp.

Like Indiana Jones stepping out into mid-air, only to find solid ground under his feet.


Or the priests carrying the Ark of the Covenant stepping into the Jordan during flood season and watching the waters part before them.

Now the Jordan is at flood stage all during harvest. Yet as soon as the priests who carried the ark reached the Jordan and their feet touched the water’s edge, the water from upstream stopped flowing. Joshua 3:15-16 NIV

You might be at one of those uncertain, uncomfortable, awkward places in your life where you're looking at the circumstances and you're tempted to quit, to doubt, to turn around and go back the way you came. You might even be asking, "Are you sure, God?" But before you give up, stop and ask your all-seeing Heavenly Father for His perspective. It's probably a lot different than the tiny little screen you've been looking at!

Niki Turner is a writer, former pastor's wife, mother of four, and grandmother of two. She has thus far been unsuccessful at coming up with catchy taglines for her writing, her purpose in life, or what she hopes to achieve in the future. Suggestions are welcome.