Why the guy walked out, I have no idea. Don't care either. We enjoyed the movie. What's more important is watching the movie motivated us both to do some googling about the real story of these men who saved priceless artifacts.


The Monuments Men were a group of approximately 345 men and women from thirteen nations, most of whom volunteered for service in the newly created Monuments, Fine Arts, and Archives section, or MFAA. Most had expertise as museum directors, curators, art scholars and educators, artists, architects, and archivists. Their job description was simple: to save as much of the culture of Europe as they could during combat. These men not only had the vision to understand the grave threat to the greatest cultural and artistic achievements of civilization, but then joined the front lines to do something about it.

Click here for Smithsonian's TRUE STORY OF THE MONUMENTS MEN 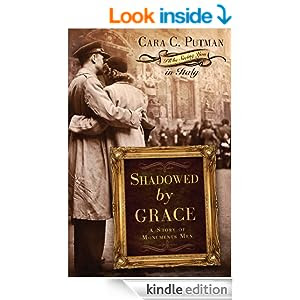 Shadowed by Grace is a dramatic story inspired by the Monuments Men of World War II by acclaimed author Cara C. Putman. Desperate to save her dying mother, Rachel accepts her newspaper’s assignment to travel to Italy to capture images dangerously close to the front lines of WWII. Her real motive – to find the father she never knew -- an artist she hopes can offer the comfort and support both she and her mother need to survive. It’s an unlikely situation for love and faith to flourish, but soon Rachel not only finds herself, but also her long-lost earthly father, and ultimately, the man her Heavenly father created to cherish and provide for her.

Books are born many ways. Shadowed by Grace started when I walked by a display at our local library the summer of 2010. There a new non-fiction book stood cover out.

The photo on the front piqued my interest: a clearly WWII soldier standing with a large painting. The stories I read in that book, Monuments Men, by Robert Edsel, intrigued me and made me want to learn more. Before long, characters and story ideas filled my mind, and I began fleshing out the story that became Shadowed by Grace.

The idea of an elite, tiny group of soldiers who were tasked with saving Western civilization fascinated me. Their task was compounded by the fact that WWII was the first war that involved constant aerial bombardment.

What challenges would they face?

What would they fear?
Then I started looking for unique roles American women filled on the European front. The idea of a war correspondent who was a photo-journalist seemed the perfect fit. An artist in her own right, she would understand the importance of saving art. Rachel Justice and Scott Lindstrom were born and became the heroine and hero in Shadowed by Grace.
SHADOWED BY GRACE by Cara Putman
B&H Publishing Group (December 4, 2013)
Desperate to save her dying mother, an American woman accepts her newspaper's assignment to travel to Italy where she takes photographs dangerously close to the front lines during World War II. But Rachel's real motive in this journey is to find the father she never knew, an artist she hopes can offer the comfort and support both she and her mother need to survive at such a desperate time.

In her quest, Rachel becomes involved with what will become the Monuments Men effort to save great monuments and works of art from the Third Reich. Soon enough she will find more than she ever imagined--in war, in love, and in God.
Available in PAPERBACK or KINDLE currently on sale for $0.99
READ AN EXCERPT
Posted by Unknown at June 27, 2014