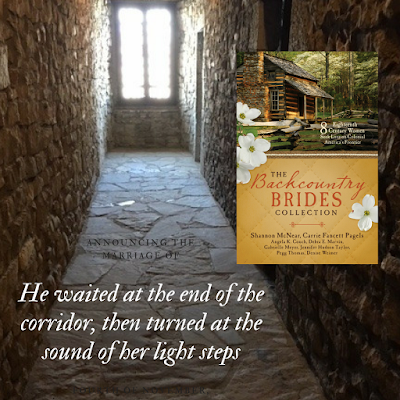 Debra here...
I chose Fort Niagara for a number of reasons. It's the oldest continually occupied fort in North America for one thing, and the incredible building known as The French Castle was indeed built by the French in the early 1700s.  The setting in stunning--the very corner of what is now New York State, where the Niagara River flows in to Lake Ontario. But my inspiration for this story was two compelling events after the French and Indian Wars (Seven Years' War) while the British army held the fort. Locally the settlers and the native Haudenosaunee (Iroquois) lived in guarded peace. But Pontiac's Rebellion waged on in the west. An event known as The Massacre at Devil's Hole, along the river south of the fort, caused Sir William Johnson, the Indian Agent for the British Crown, to call on all tribes to come to Fort Niagara for 'The Great Gathering" for peace. Johnson lived quite happily in Mohawk country to the east, but Fort Niagara was in Seneca country, and most Seneca villages sided with the French rather than the British.  And it was a group of Seneca warriors responsible for the Devil's Hole Massacre.


A HEART SO TENDER features a British Lieutenant forced to face the very warriors he holds responsible for his friend's death. Worse, he is charged with the safety of a young British woman who has come to the fort as a guest of Sir William--a woman who longs to work with the Indian people she so admires and wants to help.

Check out my Pinterest Page for more photos and images

Find out more about this collection at Amazon

Tonight, I'm part of an online Facebook Party, where I'm giving away an ebook version of Backcountry Brides.  The party runs from 1- 8 pm east coast time. I'll be hosting from 4-4:30, but stop in anytime and comment!

I'll be giving away a paperback to one random commenter who answers my question.  What question, you ask? Visit the Colonial Quills blog to find out!

While I pour the tea, consider signing up for my newsletter. I have a promotion (during the months of May, June and July) for new subscribers. One will randomly win a $25 Amazon Gift Card to help me celebrate the release of Backcountry Brides!


And, if you'd like to get in on the fun, here's a Rafflecopter promotion for a Kindle Paperwhite and other prizes, hosted by the Backcountry Brides Authors.
a Rafflecopter giveaway
Posted by Debra E. Marvin at May 01, 2018